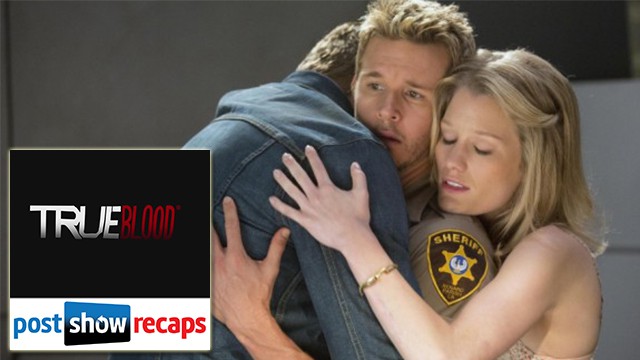 I can’t believe there are only four more episodes until True Blood is in the history books. The last few weeks recapping the episodes have flown by.

Rapid-fire recap: Bill’s got an incredibly fast moving case of Hep-V thanks to Sookie. But Sarah Newlin’s got the cure – and she’s been provided with safe passage after curing her sister. Although Eric, Pam and the Yokomoto Corporation are hot on her heels.

SISTER SLUDGE – Amber is chained-up (which is a story that Big Brother fans may hear again about a different Amber once Caleb is released from the house), being questioned on the whereabouts of her sister, Sarah Newlin. Amber, having been given the antidote for Hep-V by her sister last week, refuses to give up her location.

Inadvertently, Amber reveals that Sarah herself is the cure. Unable to convince her to give up Sarah, Eric’s temper gets the best of him and – much to the dismay of Pam and Gus Jr. – he drives a stake right through Amber’s heart, turning her into bright red Nickelodeon sludge.

Pam later comes down on Eric for killing the only person with information about the potential cure’s location. Eric maintains that he’s only interested in killing Sarah, not in synthesizing her blood for the cure. But Mr. Gus offers him 49% of a company that can harvest the cure if Newlin is found – NuBlood (phonetics TBD). Gus Jr. wants Eric to be their spokesperson, proving that the cure works.

After some convincing, Eric agrees. But I’m calling it now: they catch Newlin at the Fellowship of the Sun, Eric synthesizes her blood, kills her, and chooses to die in the same manner as Godric back in Season 2.

GONE BABY GONE – Last week, Adilyn and Wade ran away from their disapproving parents and landed at Fort Bellefleur. But Violet, who had just discovered that Jason cheated on her, convinced them to go with her to god-knows-where, likely to drain Adilyn of her blood and ruin everyone’s day.

Andy calls Jessica to see if she has sensed that Adilyn could be in trouble. Jessica hasn’t felt anything, but promises to keep Andy in the loop if she does.

When their continued search leads to another dead end, Andy breaks down in tears. It’s a great reminder of the humanity Chris Bauer has brought to this role for seven years. Although the storylines for Andy have always been a bit thin, he’s always been a piece of this show’s backbone.

LOVE SHACK, BABY, LOVE SHACK – Meanwhile, Violet has taken Adilyn/Wade to some sort of weird cabin in the woods. Violet tries to feign her sympathy for the lovelorn stepsiblings, even detailing how she “used to fuck [her] brother too.”

“A lot,” she adds for good measure. Put that into the TMI category.

Violet reveals that she’s going to get some rest, but not before planting a big kiss on Adilyn. “Have fun fucking!” she tells the teens as she leaves them.

On a scale of one to crazytown bananapants this chick is batshit nuts. And I’m somehow finding myself worried for the little fae and her darling stepbro.

Adilyn and Wade discuss which of the various sex apparatuses and oils they should use. Thanks to her fairy voodoo mind-reading magic, Adilyn knows that Wade isn’t so into this. And they have a cute moment where they decide they don’t need sex toys to enjoy being together – because they’re both virgins. Aww, this is like an episode of Degrassi or something. Really touching stuff. Barf.

Later, Violet wakes up with an evil grin, as true supervillains do. Violet’s demeanor towards Adilyn/Wade sours, as she chains Adilyn up. This turns on Jessica’s Spidey sense and she goes running to save the teenage incest duo.

We get a couple of Bill flashbacks this week, too, so you know the writers were looking to kill time.

Bill has a flashback to his father forcing him to marry Caroline, his eventual human wife. Bill’s upset, because he wanted to go to California to “see the world.” In 2014, that’s code for travelling to LA, running out of money and abandoning your promising back-up choreography gig to become a stripper. Bill’s father is dying – probably at like 55 because this is, like, pre-polio vaccination – and wants Bill to marry Caroline so his mother can be taken care of. Bill agrees.

As is typical with these Bill flashbacks, it doesn’t give me any information I really cared to know. Bill is easily one of the least interesting True Blood characters and I’m not clamoring for more info on his meet-cute with his wife.

When Bill meets Caroline, he’s quite taken with her. They laugh and giggle, as a debutante and her handsome suitor would do in a flashback such as this. Ugh, whatever. I guess it still feels more natural than a date on The Bachelor. Less scripted though.

BACK IN TOWN – Arlene is excited to have visitors to Bellefleur’s. She’s a bit caught off-guard by the beautiful blonde that walks in. But then Hoyt strolls in a few moments later.

This typical TV/movie trope frustrates me. A character that has been written out comes back to visit with a new significant other. Rather than entering the bar or house or whatever at the same time as their new partner, they let them go in first. WHO DOES THAT? Don’t most couples go into places together, anyhow? Did Hoyt have to tie his shoes or something?

So in catching-up with Arlene, Hoyt reveals that he’s on his way to talk to Officer Stackhouse. The audience may remember that Jessica glamored Hoyt a few years back to forget that she and Jason ever existed. So he has no idea that this Officer Stackhouse used to be his best friend… before he, you know, slept with his girlfriend.

Arlene gives Jason a call, who comes down to the diner to meet Hoyt and his new girlfriend. From the second he lays eyes on her, Jason is into Hoyt’s girlfriend, Bridget. I guess you really can’t teach an old dog new tricks. When Hoyt invites Jason to sit down with them, he declines… but Bridget is insistent. So, of course, Jason sits next to her. Goddamn it, Jason – why do you make your own life so difficult?

Hoyt feels extremely guilty for Maxine’s death and Bridget convinces Jason to talk to him, since he at least knew Maxine. Jason lies to Hoyt, telling him that his mom was “one of the good ones,” and not a part of the angry mob from a few weeks ago. Jason’s such a well-intentioned guy, always lying to spare peoples’ feelings. Sure would be nice if he’d stop sleeping with peoples’ girlfriends though.

EYE IN THE SKY – Sarah Newlin (aka: “Numi”) arrives at the abandoned church that once housed the Fellowship of the Sun. Her time on the run has clearly damaged her sanity – she has a vision of a shirtless Jason, taunting her by reminding her that Eric is coming to kill her. She eventually snaps out of it, but she’s clearly unhinged.

Meanwhile, the Yokomoto Corp. has used a high-tech satellite to track her down. Funny: in all of the supernatural crap this show has tried to creep me out with over the years (witches, maenads, werewolves, etc), the fact that a corporation can track a human down this easily is the spookiest notion they’ve ever raised.

Sarah’s visions continue that night, as she sees both Steve Newlin and Guru Dutta. But her moment of insanity is interrupted by the arrival of Gus Jr., Pam, Eric, and the Yakuza.

SPOTLIGHT OF THE WEEK: CARRIE PRESTON – This week was quite the week for Carrie Preston, who was actually given some significant screentime. She started out the week having a sex dream about her vampire savior, who I affectionately refer to as Purple Keith for his borderline invisibility this season. Talk about plot devices – this guy was brought onto the show solely to give Arlene something (or, more accurately, someone) to do in the show’s final season.

She gets a nice scene with Sam, where she reveals that she could never imagine leaving Bon Temps despite all of the heartache that living there has caused her. But she also manages to convince him that he should consider leaving it behind to be with Nicole.

Finally, she gets a scene at Bellefleur’s with Keith, where she drops him some key info: she’s Hep-V positive, which means they can’t have sex and he certainly can’t feed off of her. But Keith is cool just to dance with her. That’s okay, Keith: I know a lot of really awesome gay people.

DO YOU BELIEVE IN MAGIC? IF SO, YOU SHOULDN’T – Sookie calls Dr. Ludwig, who some fans may remember from past seasons, having saved Sookie from poison and Pam from a decomposition spell.

We get some exposition from Ludwig, who reveals that Sookie’s fairy lineage could have something to do with the accelerated rate of Bill’s Hep-V. But when Sookie even mentions the name of her fairy great grandfather, Niall Brigant, Ludwig leaves in a hurry. Well, in as much of a hurry as a crippled, dwarf doctor can possibly be.

Later, Sookie calls out for Niall, who shows-up at the house. He reveals that he always is watching Sookie, which means he knew she was infected with Hep-V when he fed off of her and did nothing to stop it. Nonetheless, Sookie convinces Niall to give saving Bill a shot. Me? I’d care a little more that my old man grandfather has probably been a giant perv, watching me get changed all my life. But I guess that 99% of the vampire/werewolf community has seen Sookie naked by this point, so she probably doesn’t care much.

Niall and Sookie use their fairy magic to get in on Bill’s flashbacks. But Sookie wants to find a cure for Bill, not relive his greatest hits with another woman. Niall tries to convince Sookie that she needs to forgive herself because there’s nothing she can do: there’s no magic that can save Bill from Hep-V. Their foray into magic was essentially just a giant waste of time.

Sad and feeling betrayed, Sookie asks Niall to leave. Sookie, he is always watching you – asking him to leave is useless. So dumb.

That night, Sookie runs to Bill’s barefoot in a nightie – could someone please remind her to take a sweater – where they share a deep kiss and she tells him she’ll stay with him ‘til the end. That’s all fine and dandy, but seriously, she should wash her feet now or she’ll also give Bill toe fungus.

Bill and Sookie sleep together, which is a terrible idea given the speed with which Bill’s Hep-V is moving. Also: Jessica lives in that house. I can understand the homage to Bill and Sookie’s first time, but I can’t imagine them doing it in the living room when Bill’s progeny could walk in on them at any moment. That would scar Jess for life. Read a parenting book, Bill!

OVERALL – A slow, but not altogether terrible episode. With just three left, I think we’ll see some movement next week in a bunch of these storylines. And maybe even a major death? Share your opinions & predictions in the comments!