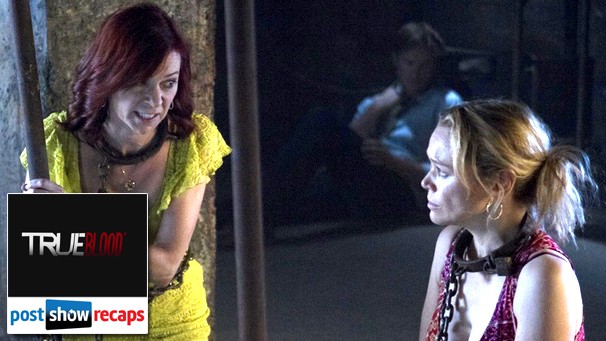 Welcome back to my recaps of the final season of True Blood!

To recap last week’s episode: Tara died, nobody cared, a couple of useless characters were kidnapped, and in a stunning cliffhanger, Sookie politely asked the town if she could help them with their problems.

No Shirts, No Shoes, Complete Fan Service – The opening scene completely panders to the female and gay demographics of the show (i.e. 99% of those watching). But it’s funny and it works because Kwanten and Skarsgard both completely commit.

As an aside, let me say that Kwanten has truly been the unsung hero of True Blood since the first season, as some of last week’s commenters noted. Even when he has been given the shittiest of storylines (see: werepanthers), he has always managed to elevate them to being watchable simply with his presence.

Like I noted last week, the later seasons of True Blood have worked best when they’ve gone completely campy. Hence why this scene, which really only made me laugh, is somewhat successful. Mind you, a successful scene by True Blood’s definition is any that doesn’t end in an eye roll.

Touch My (Dead) Body – In a response to last week’s shocking cliffhanger that nobody cared about, Sookie seems to be given some latitude to help out Sheriff Andy. She suggests that they ID the dead girl she found in the woods last week whom she didn’t recognize.

The natural response from a mayor or a sheriff is: “Well, Sookie, it’s highly improbable that you know every single person that lives in Bon Temps. If you weren’t so busy getting finger-banged by every vampire, werewolf, or fairy in town, maybe you’d know more people.”

But alas, nobody questions our idiotic heroine; and in the end, she is correct and the girl comes from two towns over. Sam tries to reach their sheriff, whom he apparently has on speed dial, but to no avail.

And you know what that means…

(I’m a) Slave for V – Lettie Mae pays Lafayette a visit, begging him for V so she can be reunited with Tara. Lafayette refuses, chalking her request up to being another in a long line of drug additions.

“You’re going to hell!” she yells at him. “That’s what this is,” he deadpans in response. This reminds me: Lafayette really has been dealt a bad hand (case in point: murdering his own boyfriend while possessed by the ghost of Aunt Petunia from Harry Potter).

But I kinda wish he had given Lettie Mae some V and maybe even had some himself.  True Blood’s most successful story arc for Jason was his addiction to V.  And while the show completely botched a second addiction storyline with Andy, I’m okay with the writers going back to the well for a third try. Lettie Mae is a prime candidate, reeling from Tara’s demise and still struggling to overcome her past drug additions.  And Lafayette is much more fun when he’s shady but calculated, rather than acting as the sage, magical negro the show has tried to make him into over the last few years. But I guess there’s still a lot of the season left to explore this avenue, so I’ll shut-up for now.

As another aside, I have to say that I’m happy to see that at least one character is still mourning Tara, who literally died yesterday. Last season, perennial snoozefest Terry got an entire episode devoted to flashbacks about how amazing he was, complete with a funeral. This season, Tara died less than one scene into the season and was barely mentioned again. Talk about priorities.

Lettie Mae comes up with a crafty way to get the V: useless, dumb Willa. And suddenly, Lettie Mae is having crazy visions of Tara on a cross with a snake (a throwback to Britney at the VMA’s, obviously).

Bad Teacher – There’s dissension among the Hep V infectees, and they’re arguing more than the Brains tribe before Tribal Council. They agree that the Carol Brady of the group should replace the Adam Levine lookalike as the one to grab the bodies from the basement and drag them upstairs. Adam Levine, after devouring a dude last week all on his own, now has to eat last.

It turns out that Carol Brady was a schoolteacher who recognized Arlene, choosing to spare her. I love Carrie Preston and have always felt that the material the writers give Arlene has shortchanged her. But this episode gives her an opportunity to show off.

When Arlene gets Ms. Harris’ attention, it isn’t long before the erstwhile teacher is crying in her lap. Arlene eventually reasons with her and gets her to think about helping them. Breaking the fourth wall, Arlene utters, “Your legacy is all you have now in your last days!” to Ms. Harris. Oh, True Blood – take your own damn advice.

In the end, Ms. Harris tricks the other vampires into letting her be their human (well, vampire) alarm clock. Apparently vampires have no idea that iPhones now come equipped with an Alarm Clock app. Anyway, Ms. Harris needs to feed on some human blood so she has the energy to save Arlene and the other miscellaneous characters that none of us care about. After going to town on Arlene’s inner thighs, Ms. Harris decomposes and turns into red goop. Try explaining that sentence to anybody that has never seen True Blood before.

One for the Road Trip – Our merry band of travellers quickly arrives in Saint Alice, which is seemingly picked clean. Someone was even nice enough to leave some paint messages on the hardware store and church. Sam spots an SOS sign and it seems that nobody (not even FEMA!) would help the poor town of Saint Alice.

For the first time all season, there’s a genuine sense of eeriness in this mostly-silent scene.

“I am sleeping inside [with] 100 lbs of silver and 2 UV guns,” reads one of the signs, obviously written in zombie blood by Maggie from The Walking Dead.

And then… the reveal. Sookie stumbles on a gigantic pit full of dead people. “There’s no one left. They either took or killed everyone,” Sookie says. I’m sorry, but does Sookie have access to some sort of census data about Saint Alice that I’ve never seen? How does she know that every single person is dead? Did she count all of the  bodies? Ugh.

The highlight of the road trip has gotta be Jason’s pizza forensics (haha!), which give him the foresight to know that the vampires were in Saint Alice two days prior. I’m less of a fan of Andy’s didactic monologue about how he wants to marry Holly (hint: nobody cares).

But the worst moment of the episode just has to be Sookie finding the dead girl’s diary (well, it’s more of a diary/suicide note hybrid). For the love of Lillith Billith God, who keeps a diary in their twenties?!

And then… long flashback to Sookie getting ready to go to Fangtasia with Bill. This is so fucking obnoxious. I mean, we all get that Bill and Sookie are soulmates or whatever. But I don’t think anybody actually likes the two of them together. If the actors weren’t married in real life, I think the writers would never have tried to convince us that Sookie and Bill are meant to be; I really think we’d be looking at the show playing with its most successful pairing: Sookie and Eric.

My suspicions are all but confirmed when Sookie tricks Alcide into taking a shower while she goes off to talk to Bill, after sundown no less, because she is seriously just the dumbest. Sookie asks Bill if he can still sense her fear. I’m guessing his response will be something like, “Well, maybe Sookie. But I think we should drink each other’s blood again just to be sure.” Predictable.

Fairy Bad Choices – At Bellefleur’s, the guy that lost the mayoral race (whom I’ll now just call Canon Fodder Bad Guy, since we all know he’ll eventually be mercilessly and painfully slaughtered) rallies everyone together to go after the vampires. “Because that’s a good idea,” said nobody ever. They gather together some homemade stakes (made from chair legs and rakes, so you just know they’re great) and take off.

But Adilyn and one of Holly’s kids (I honestly have no idea what their names are or how to tell them apart) sneak out to tip off Kenya that everybody is coming to the police station to steal the guns.

The mob tries to explain to Kenya that they want the guns to protect themselves from the vampires (and from Sam, or as the wonderful Maxine Fortenberry calls him, some sort of bear-dog). Maxine also has the foresight to point out that Andy’s daughter was a newborn the last time she checked. “The fuck’s going on with that, I have no idea.” Good point. That literally explains this entire show. Thanks, Maxine!

Kenya turns on Adilyn, who fairy blasts her in protest. This alerts her protector, Jessica, that something is up. When Andy comes home, he’s forced to team up with Jessica to save Adilyn.

In Sickness, Not in Health – Pam finds Eric in France. And in what constitutes as a true cliffhanger, he’s got Hep V. Or he’s just inexplicably veiny on his chest. One or the other I guess.

Overall – I have to say: this episode was a marked improvement in almost every way from the premiere. Most of the storylines were intriguing (Arlene and Lettie Mae in particular), while the show only continued to really struggle with keeping Sookie interesting. Funny, because this was an episode that focused almost entirely on the human characters and basically ignored the vampires (Bill, Pam, Eric, Jessica, Violet, etc.)

What did you think of the reveal that Eric is currently fated to die before the series is over? Were you as frustrated as I was that Sookie continues to be just the worst? And, most importantly, did you not absolutely love every second of Maxine Fortenberry?

Sound off in the comments!