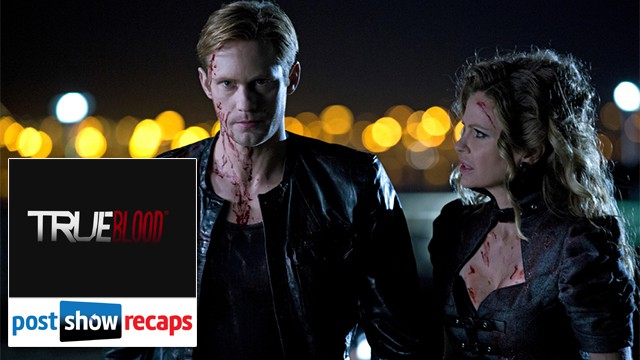 Another Sunday, another episode of True Blood. Let’s get right into the good stuff.

Family Reunion – Willa is downright furious that she’s being forced to go with Pam/Eric on their adventure to kill Sarah Newlin. Her anger is mostly justified: Eric essentially abandoned her while he gallivanted throughout Europe on his goodbye tour. Eric’s rationale for trying to drag Willa along (that she was technically Newlin’s stepdaughter, so she may know some info about her) is plenty convoluted – but hey, this is a better storyline for Willa than having uninteresting conversations with Reverend Daniels so I’m on board.

Willa forces Eric to release her in exchange for info on Newlin, which makes no sense because Eric can technically force her to tell him anything he wants to know. Seriously. But of course, Willa has some valuable dirt on her ex-stepmother that nobody else knows: her sister is a vampire. Willa knows a lot about Sarah’s sister: her name, hometown, address, social security number, favourite Beatle. Basically all of the info Eric needs to find Sarah before he dies.

Ginger pleads with Eric to be allowed to go with them to find Sarah in Dallas, reminding him that she has been his sexless sex slave for fifteen years. “Do you know what a sex slave is without the sex?” she whines. “A slave?” Pam retorts. Pam’s one-liners have been truly great this season.

Ginger demands that if Eric won’t take her to Dallas, he’d better sleep with her. “Ginger, I’m diseased,” he says, trying to reason with her. Her magical response? “So the fuck am I!” Well alrighty then. Head shakes all around at my house.

You Can’t Spell Funeral Without FUN – Sookie gets home, where she finds Alcide’s clothes… because, you know, he was going to shower before she basically got him killed by putting herself in danger for the umpteenth time.

Sookie sleeps for a while. Like, a really long while – a full day or so. Among her other problems, Sookie is now gonna have a really hard time falling asleep the next night.

By the time she wakes up, Jackson has arrived to go through all of Alcide’s things. Oh, and Lafayette is throwing a party.

Sookie’s best friend and boyfriend are dead for like two days and everyone wants to throw a party? Isn’t it just a tad bit presumptuous to assume that your friend is gonna be up to hosting the entire town in her house like, a day after her boyfriend dies?

Somehow, Lafayette manages to convince her that Alcide and Tara would want Sookie to throw a party (because that was totally in both of their personalities… real party animals, those two) and so she’s off to get ready for the ball. And since you can’t have the ball without a prince… of course, Bill arrives! Barf.

My Sister’s Reaper  – Eric and Pam manage to find Sarah Newlin’s sister in Dallas, who’s also infected with Hep-V. I’m starting to wish that Eric would become the Matthew McConaughey of True Blood and start some sort of Dallas Buyers Club for the infected vampires.

Eric offers Amber the opportunity to help him find (and kill) her sister. She gladly accepts, upset that Sarah denounced her on public television. She also has some key information: Sarah is in Dallas and she’s gone to a Bush gala to find her parents for protection. Amber reminds Eric that getting in will be impossible for them because they’re vampires and security is going to be extra tight. Somehow I don’t think this’ll be an issue for Eric.

After finding an excuse to get glammed up (Pam: “Oh my god. I’m a republicunt.”), Eric takes his shirt off… and is officially Stage 2 in his Hep-V. Uh oh.

Party Like It’s Whatever Year True Blood’s Timeline Is In Now – Back to Sookie’s, where the party is heating up. Random people are talking! Sam’s wearing an ugly red jacket! Bill is awkwardly dancing by himself! Nicole is… there! Wow, this is a real party (sarcasm implied).

Ah, and you can’t have a party without a war flashback. This time we see Bill dismiss the notion that the South can win the Civil War. Spoiler alert: he’s right.

After an awkward conversation with Violet, Sookie finds herself in the middle of Jackson’s memorial speech for Alcide. Jackson’s convinced (and Sookie seems to agree) that Alcide died a hero. Which could not be further from the truth. Alcide died as a matter of happenstance. He wasn’t supposed to be in the woods that night. And if Sookie hadn’t been such a boneheaded nitwit, he likely wouldn’t have died.

Oh well, no time for that. Lettie Mae has arrived (after drugging the Reverend into a deep sleep, which is only fair, because every time Reverend Daniels talks, I feel like I want to fall asleep). Sookie gives her the opportunity to say a few words for Tara. It’s a nice bookend for the relationship Lettie Mae and Tara had over the show’s run… but it feels a little bit too neat, given that we still have five episodes to go.

Holly Matrimony – Meanwhile, Andy and Jessica have a heart-to-heart. He basically offers her redemption for murdering his children in exchange for a ring off of her finger so he can propose to Holly. I mean… I guess. Nothing says “I’m sorry for brutally slaughtering all of your kids” like a cheap ring.

Jessica has another idea: Gran’s ring. Apparently, Gran would be thrilled because she “loved Holly,” which makes no sense because Holly wasn’t introduced until like three seasons after Gran’s death. Like I said though: no time for plot holes!

Andy bumbles into the party and – in his own awkward way – makes a pretty sweet proposal to Holly. Aww. Chris Bauer does a nice job in this scene, reminding me that he’s always done some great work with some piss poor material over this show’s run. Holly accepts (prematurely) and the show has another gushy moment.

Except Sookie’s incapable of being happy because she’s lonely now. Wah wah. Arlene gives her a pep talk about how to get over the death of a loved one: time and tequila. Jackson overhears, which I’m not sure matters. Is this supposed to be dramatic at all?

Sookie finds Bill acting all melancholy outside (after another snoozefest flashback). Bill applauds Sookie on her ability to bring the people and vampires of Bon Temps together. They share a hug – but that damn sexy True Blood music plays, so you know she wants more. Goddamn it, Sookie.

Returning to the party, Sookie overhears that Lettie Mae is planning on stabbing Willa to get some of her blood (because… that’s a thing that happens on this show). I’m rooting for her to succeed here, both because it’s a hilarious concept & because I think Willa is virtually useless. Lettie Mae ultimately fails, and Lafayette drags her ass home. Foiled again! But that Lettie Mae has more resilience than Pinky & the Brain, so you just know she’ll be back at it tomorrow.

This brings about what is ultimately the strangest moment of the episode. Nicole (who?) gets up and basically tells the people of Bon Temps that they’re “all fucking crazy if you ask me.” This is a good point Nicole, but (as you yourself mention) nobody asked you. So kindly shut up and go back to being as useless as Luna was.

A Couple of Shades of Gay – Keith, Arlene’s savior from last week’s episode, arrives and puts the moves on her. And this entire show is starting to feel like an episode of 90210: right down to Jessica walking outside to catch James and Lafayette fucking outside.

Naturally, Jason tries to comfort her (telling her that “he seems pretty gay to me” is probably not the definition of comforting though), but Lafayette gives her a verbal smack down that James is better suited to being with him.

Left alone, Jason and Jessica discuss his issues with Violet, particularly how he knows he wants to be with someone who he could see himself marrying. Of course, this leads them to kiss. And more. Ah, of course – get mad at your boyfriend for fucking someone else and retaliate by fucking someone else’s boyfriend.

Violet hears the two of them going at it, but doesn’t interrupt. I imagine she’s planning on getting even instead.

Dallas Liars Club – Eric and Pam successfully infiltrate the George Bush convention, which is another plot point that feels extremely weird to type out. Eric’s cowboy costume is particularly hilarious though so I’ll give it a pass.

In the bathroom, Sarah approaches her mother, and fills her in on her current predicament. I’ll guess that “I’m being tailed by the Yakuza because I created a disease that is slowly killing all of the vampires” is probably not every mother’s dream for their daughter.

Speaking of the Yakuza, they arrive and start gunning down the party guests, murdering Sarah’s parents in cold blood. As she tries to run, Sarah finds Eric, who starts choking the life out of her. When the gunmen catch up, Eric kills them, even managing to Oberyn one of them through the nostrils.

I guess that means Sarah is going to have to answer to Eric for her crimes against the vampire race next week.

True Love (or Death?) – After the party, Sookie crawls into bed in Alcide’s jacket, crying herself to sleep. Or non-sleep. Because she literally slept for twenty-four hours and is probably wide awake now. That’s okay: I’m sure there’s like a Reba marathon on or something. With all the crazy crap that’s happened to her, I imagine Sookie is like the only person in North America that hasn’t caught-up on Breaking Bad yet. And you just know she’s that annoying friend that’s like “Don’t ruin it for me; I’m gonna watch it eventually” and then googles the ending anyway.

Okay, sorry – that was oddly specific.

Bill, meanwhile, takes a bath where he remembers the promise he made to Caroline, his deceased wife, about returning to her and their children from the civil war: a promise he obviously failed to keep.

Looking in the mirror, Bill notices a vein. A vein in the middle of his chest. Uh oh – he’s got Hep-V too. Now this is a plot development I can get behind.

Overall – This week’s episode kind of proved to me that the show has really run out of gas. Last week’s episode had a lot going on plot-wise, but this episode seemed to drag. There’s no real villain anymore and I’m not really into all of the love triangle bullshit.

Although I’m surprised by the development of Bill having Hep-V, I have a sneaking suspicion that a cure will be found just in time to save him.

What did you think of this week’s episode? Did you also feel like the tension and drama were gone? And how do you think it all ends for Sookie and Bill?