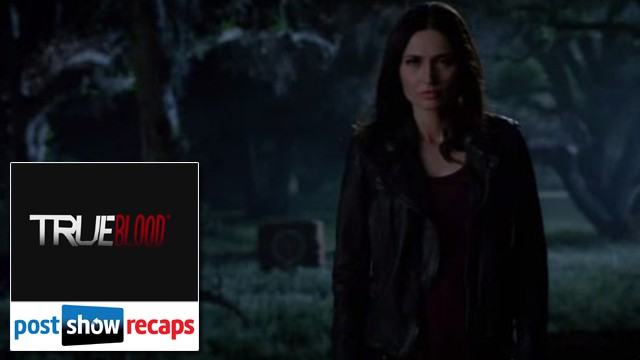 LET’S MAKE A DEAL – We open on the resolution of Eric’s fight with the Yakuza. After successfully holding down the fort for the first wave, he’s moving exceptionally slowly. Apparently the second stage of Hep-V will do that to you. I hear Hodgkin’s Hep-V is particularly bad (sorry, that was probably too much).

Eric is forced to surrender when some Yakuza henchmen arrive with Pam in chains. Damn. So they’re whisked away – in what look like cars right out of The Fast and the Furious: Tokyo Drift – to some building, where they’re forced to wait until sunrise. “Our first sunrise together,” Eric coos. Pam can’t help but smile. She’ll be meeting her maker… with her maker. Ha, irony.

Eventually, The North American president of the Yakanoro Corporation (whom I instantly thought of as Asian-mode Cowboy, in Big Brother terms) arrives. Pam is able to strike a deal for their lives, in exchange for information about Sarah Newlin. Just in time for sunrise, they’re able to strike a deal. Eric will kill her and provide the Yakuza with the body.

BILL’S WILL – Picking up on last week’s cliffhanger, Bill has just realized that he has Hep-V. And this is particularly bad because they’ve just started to give him lovey-dovey music in his scenes with Sookie again.

Bill makes a call to his lawyer when he hears this news… but he gets her number via the Internet. He has to google his own lawyer’s cell phone? Bill, you’ve been alive for hundreds of years and you’re telling me you haven’t heard of saving numbers to your contacts? Smart phones aren’t that confusing, damn it.

Meanwhile, Jessica arrives home. Somehow Bill’s voice is inflecting louder downstairs (where Jessica is within earshot) than in his own bedroom. I don’t quite understand the logistics of this. Perhaps Bill hit the speaker button and amplified his call through his vampire mansion’s PA system?

They exchange pleasantries and Bill is off to speak to his lawyer in person. Seems like even important vampire governors are still unimportant enough to wait for lawyers, too. At least there’s a shred of realism to this show.

Bill arrives at Kapneck law offices, grabbing a number and starting a five to seven hour wait. Serves you right for not having your affairs in order and making a will sooner, Bill. You’re a freaking vampire; you could die at any moment from common things like sunlight or a splinter in the wrong place or really garlicky rapini. The least you could do is have a plan for what should be done with your money and spooky mansion.

“TRIP” DOWN MEMORY LANE – Lafayette schleps Lettie Mae back to his place, where James is waiting… likely because he has nowhere to go. James convinces his new boyfriend to allow Lettie Mae to have some of his blood so she can, in her words, speak to Tara. Lafayette is adamant that this is the end to this, no matter what the outcome.

After they take James’ blood, Lettie Mae shows Lafayette her vision of Tara. She’s still hanging from a cross dressed in white, with a snake around her neck. Oh, she’s also speaking in tongues. Vision Quest Tara leads them to her own memory of their old house, where she starts rapidly digging in the front lawn.

… Just in time for Reverend Daniels to wake them up.

Lettie Mae has the bright idea to go back to their old home. They have a debate about God (without any mention of Lillith, thankfully) before the Reverend decides to give his wife an ultimatum: him or the V. She tearfully tells him that this is something that she has to do.

A WOMAN SCORNED – Jason returns home after completely cheating on Violet with Jessica. He finds dozens of candles and his vampire girlfriend in lingerie. He has no idea that she already knows he was cheating on her. Violet starts telling Jason that she wants to make sure he feels appreciated, letting him know that she wants him to feel like he is in control of their relationship.

Afterwards, Jason gets a call from Jessica. She just wants Jason to bring Sookie over to the house. Jason sneaks off, pants in hand, not saying anything about it to Violet.

Already suspicious, Violet thinks there’s something more going on with Jessica: as a result, she makes a complete mess of their home. She knocks all of their belongings off the shelves, completely shatters a mirror, and probably wakes up the neighbors with her loud growls. She’s either completely onto Jason’s infidelity or she’s getting meta and acting out on behalf of True Blood fans.

BAD BLOOD – Jason drags a hungover Sookie to the Compton house to meet up with Jessica. Jess drops the V-bomb on Sookie and Jason, and Sookie is now pretty sure that she herself could be Hep-V positive. With so many characters sick, I’m damn sure I’m never going to share my needles with anyone. Thanks, True Blood, for teaching me a truly valuable lesson.

After taking another Hep-V test, Sookie and Jason share a bottle of… something. Sookie tells Jason about her dilemma (i.e. her strong feelings for Bill despite her feelings of remorse for Alcide). Jason also shares his confusion over his own feelings. Sookie prods him into following his heart, to which Jason responds by deciding to break it off with Violet.

… And then, test results time. Dum dum dum. I kind of wish they had Maury Povich on hand to deliver the results.

Without further adieu, Sookie’s got Hep-V.

This is a surprising development, but it’s just got me more convinced that they’ll eventually find a cure so that Sookie and Bill can live happily ever after.

THE NEW NEWLIN – Predictably, Sarah Newlin breaks into her sister’s house. Amber attacks her and throws her onto the ground, but starts choking up blood when she goes in for the kill and passes out.

When Amber comes to, Sarah makes the pitch: she wants to wait around there for a few days. But Amber kicks her to the curb, telling Sarah that she made her sick, both metaphorically and literally.

“I am the antidote, sweetie. Let me heal you.”

When Eric et al arrive at Amber’s to give Sarah over to the Yakuza, they find Amber completely healed. Well, hot damn – the cure is real. But the real question is where in the hell Sarah has gone.

BROTHERS & SISTERS – Andy wakes up to go check on Adilyn and he just so happens to find her getting it on with Holly’s son, Wade (aka: her soon-to-be stepbrother). I guess that fills HBO’s incest quota for the season, right? Every show has to have a scene or two, given the success of Game of Thrones. The Lannister twins would be proud! Andy goes a little nuts on Wade, which upsets Holly.

The next day, Holly and Arlene head to Bellefleur’s, which is still a shithole from the angry mob’s roundup earlier in the season. Remember the angry mob? They all just randomly died a few episodes ago without so much as an afterthought.

Andy arrives to talk to Holly, leading to an argument about who is responsible for Adilyn and Wade sleeping together. Arlene mediates their argument, sending them off to discuss the issue with their kids. But they’ve gone to Fort Bellefleur, where a very pissed Violet has convinced them to ditch their cell phones and go off with her.

This show teaches you everything – don’t drink the blood of people infected with gross diseases, don’t give into your teenage impulses to sleep with your eventual step-siblings, don’t date a shapeshifting mayor and then get on their case because their life is too crazy. True Blood is like a really awesome PSA.

DEATH KNOCKS (ON YOUR OFFICE DOOR) – Back in the law offices of Cellino & Barnes or someone, Bill’s Hep-V is accelerating really quickly. It’s even so bad that one of the other waiting room vampires moves to a different seat.

Bill’s number is eventually called, just as he is seemingly entering Stage 2.

The lawyer gives Bill some bad news: his will is technically null and void. Adoption is tossed around as a potential workaround, but Bill’s disease is accelerating at an extremely fast rate.

The only solution, the lawyer says, is to pay $10 million to move to the front of the adoption line. Bill attempts to get out of it by glamouring the opportunistic lawyer, but she’s immune thanks to contacts she picked up from Walgreens. Gotta love Walgreens.

After Bill decides to take his business elsewhere, she launches into a rant about how vampires have had longer to amass their fortunes and live off of the human race. Bill’s response is to, you know, casually stab her in the neck with a letter opener.

I can see why Sookie likes Bill sometimes, but he sure does have a bad temper. This is like the fourth or fifth time he’s just gone psycho and murdered someone with little to no reason or compassion. But hey, we’re supposed to feel bad because he’s dying, y’all!

When Bill gets home, Sookie and Jessica are waiting for him. Their pseudo-family is about to get rocked.

OVERALL – Aww, the show actually kind of has me with this Bill-Sookie Hep-V storyline. But knowing the cure is out there totally decreases the stakes (no pun intended), right? Sound off in the comments on this week’s episode. How do you think it’ll all end?