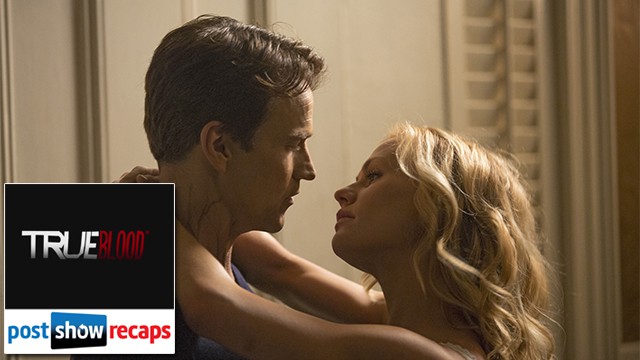 We left off with:

Let’s get into tonight’s events.

Cured: From a Disease, Not the Meat Kind – Prompted by a vision of Jason, Sarah Newlin gives herself up to the Vampire Justice League (aka: Eric and the Yakanomo Corporation). But Eric doesn’t want to talk things over: he has every intention of killing her, a notion she seems to understand is an inevitably.

Pam literally takes things into her own hands – she promises to shoot herself if Eric kills Newlin. To be honest, none of this makes sense. Eric could very easily just drain Sarah’s blood and then kill her. He’s a rational vampire, but this is certainly not one of his finest moments.

Sarah continues to prattle on about senseless idiocies: prophecies, the messiah, being a princess of peace, blah blah. Eric responds by biting into her and sampling her blood – which cures his Hep-V and gets rid of his ugly veins (instantly for dramatic effect, of course). And here I thought salt water was the cure for everything.

Eric cackles triumphantly as only people on TV do.

Bill wants to know what Sookie’s thinking about. And, obviously, she’s thinking about herself. Sookie dredges up ancient history by asking Bill what his deal was with Queen Sophie-Anne. Bill finally reveals that her plan was to breed Sookie to create additional fairies. He was supposed to bring Sookie to her, but didn’t. He thought that protecting Sookie would bring him some sort of redemption for the horrible things he had done as a vampire.

Look, I won’t say I’ve forgiven Bill for his actions in Season 5, but this is probably the best the show is going to do to get me there. I mean, Bill went psycho two seasons ago and the show did a terrible job of explaining why. But if we pretend the Lillith storyline never happened at all, I’m okay with Sookie/Bill together now. Other than her boyfriend dying, like, two days ago, this seems natural.

Digging (Plot) Holes – Reverend Daniels comes to stop Lettie Mae and Lafayette from digging up an entire lawn on their cracked-out vision quest. Daniels is still convinced that Lettie Mae is just a cracked-out junkie. But she’s able to convince him to trust her – and so they (and Lafayette, who speaks no more than twice in this episode) drink James’ blood. And they follow their vision of Tara into the house.

We’re launched into a flashback of Tara, Lafayette and Sookie at Tara’s birthday party. Tara’s dad comes home midway through and is upset that he hasn’t been invited. But he’s obviously got serious anger issues and a bad drinking problem.

The flashback shows us that Tara, as a child, took out a gun and wanted to use it to kill her father. She didn’t, but her father left anyway, crushing Lettie Mae. We’re left to obviously infer that Lettie Mae’s terrible mothering is a result of thinking that Tara was responsible for her husband leaving.

Ghost Tara tells Lettie Mae that she wishes she had pulled the trigger that day. Lettie Mae takes responsibility for her own part in making Tara’s existence so awful, but Ghost Tara wants her to forgive herself and to let her go. They hug one final time, before Tara disappears into whatever True Blood’s version of the afterlife is.

Ugh, why do I watch this? A character went on a vision quest to find closure with her dead daughter. It’s honestly hard not to think the inspiration for this storyline was that one or two of the writers used to work on Ghost Whisperer.

I suppose this storyline was meant to further humanize Lettie Mae – to show us that she wasn’t truly responsible for being a shitty mother to Tara over the first six seasons of the show. Like my issues with Bill’s redemption arc, I think the show is trying too hard to retcon its own history.

Oh well. C’est la vie. At least this B-plot should be finished now.

Shout out to Adina Porter, who absolutely crushed her scenes in this episode. Her moments with Tara are especially heartbreaking, drawing from the well of history the two characters share. The resolution is probably a bit too neat and tidy given the complicated relationship they had. But it’s sweet. And sometimes that’s enough.

You’re Turning Red & Goopy, Violet! – Hoyt’s girlfriend Bridget is cycling through old photo albums, which somehow leads to an argument over whether or not they should have kids. Did I mention that for some reason or another, Jason is there too?

Meanwhile, Jason gets a text from Violet with pictures of Adilyn and Jessica chained-up. She gives him an address and tells him to hurry… with a winkie face. This is very confusing, Violet – are you mad or are you being suggestive? Because the chained-up pictures imply anger, but the winky face implies fun. Don’t you know that simple things confuse Jason?

Obviously (luckily?) getting the hint, Jason rockets over to save the day. Which, if you think about it, is an awful idea – there’s no way that Jason Stackhouse is equipped to defeat a hundreds-of-years-old vampire. But damn it, he’s dumb enough to try!

Somehow Bridget ends-up in the car being dragged along. It doesn’t really make sense, but I guess we’ll go with it.  Jason could have talked her out of it by being like, “We’re going to meet up with a very old vampire that wants to kill any girl I’ve ever talked to or had sex with,” or “I’m going to deal with a police issue – which involves guns and danger and scary things.” Better yet, he could have gone with “I’m going to watch True Blood on DVD. And not the good seasons – only the ones with Warlow and Nora and Luna.”

Jason enters Violet’s sex dungeon, where she’s playing what sounds like Enya on repeat. Um, is this the traditional brooding ritual of a woman scorned in the 1500s or something? When Violet reveals herself, she starts throwing Jason around, angry that he has become the first man to deny her. She even goes as far as comparing herself to Cleopatra and Helen of Troy. Be humble, Violet – nobody likes a gloater. Am I right, readers? See, Violet? I’m right.

So Violet chains Jason up with Adilyn, Jessica and Wade. Of course, she’s kind enough to leave them all semi-clothed because none of them have nudity in their contracts. Violet has that classic Bond villain problem of spending too much time talking about her evil plans instead of acting on them. Because, for no good reason, Hoyt shows up and kills Violet before she actually has the time to do anything.

HOW DID HOYT KNOW WHERE TO GO? There’s not even an attempt at explaining it. Did he Google Maps “Crazy Old Vampire’s Sex Dungeon”? Did he have magic powers all along? If so, I would have rather seen that for seven seasons than the bloody mess this show turned out to be. No pun intended.

Back to the Start – Thanking him for saving her, Jessica and Hoyt are introduced for what he thinks is the first time. This scene is a great reminder of how cute these two characters were together at the beginning. I could definitely get behind Jessica and Hoyt reuniting, with Jason remaining a lone wolf forever. He really is just too dumb to be tied down.

When Bridget questions Jason and Jessica’s relationship status, he gives her every sign that it’s a big ‘It’s Complicated’. And it really is. When Jason drops Jess off at home, they basically perform an autopsy on their relationship, blaming their failure as a duo on timing. But Jess has realized now that Jason is really just a friend to her.

The next day, Hoyt rolls into Bellefleur’s, where he takes a seat next to Jason. Over a beer, Hoyt asks Jason what his status with Jessica is. And this time, it’s clear that things are officially over for them.

Hoyt visits Jess, where she ushers him inside. Hoyt shares his condolences – and his clean blood – before comparing his own situation with his mother’s death to Jessica’s current state of limbo with Bill, her own father figure. Just as the two look like they’re going to kiss, Hoyt leaves to go back to Bridget.

Now that the writers have re-introduced the Hoyt/Jess dynamic, they really need to just go there. I don’t want it to be a dangling plot thread until the finale because it isn’t all that interesting. Put them together & just keep it that way.

Martyr? Yes. Smarter? No – Eric and Pam are informed that NuBlood isn’t going to market just yet. Even though the cure has been properly synthesized, the good ol’ Yakanomo Corporation wants to ensure that vampires rely on the stuff to live. They commit the cardinal bad guy sin of giving away just a bit too much information to people they can’t really trust. So, to recap, that means the Coles notes version of the plan is:

Step 1: Give the only cure to needy vampires in small but expensive doses.

Step 2: Jeopardize precarious treaty with Adonis vampire by telling him the truth.

Eric later goes to visit Sookie to tell her he’s cured himself. But she demands that he help Bill too. After much prodding, he promises to come back the following night with the cure for Bill.

… Of course, this isn’t good enough for Sookie. So she rolls up to Fangtasia, where Eric pretends that she’s some sort of groupie to keep her out of trouble with the Yakuza. Sookie hears Gus, Jr.’s thoughts, which just happen to lead her to Fangtasia’s basement. Why does everything happen downstairs at Fangtasia? Fangtasia’s basement for the 2024 Olympics!

Sookie uses her fairy magic powers to secretly blast her way into the basement, where she finds a gagged Sarah Newlin. Sarah begs Sookie to save her, but Sookie just reads her mind. “Even as the cure, you’re still the fucking problem,”  Sookie accurately deadpans.

When Gus, Jr. leaves to fly back to Dallas, Pam and Eric head to the basement to get some of Sarah’s blood for Bill. But Sookie has already returned, with Jessica and Bill in tow. Everyone spends a minute getting re-acquainted before they prompt Bill to quickly drink some of Sarah’s blood.

But when push comes to shove, Bill refuses the blood. “No,” he says. “I don’t want the blood.”

… Did I just hear the entire audience groan about this storyline being dragged out another week?

This cliffhanger isn’t particularly noteworthy: Bill is about as strong as Kathy from Big Brother 12. Pinning him down and forcing him to drink some of Sarah’s blood shouldn’t be difficult. Newsflash: he’s probably going to live.

But if Bill is really being a martyr to gain some sort of redemption with Sookie, he should know it’s not worth it. She’d mourn him for about a week before she’d be shacking up with Eric or Warlow, Jr. or some other vampire.

Enough talking from me. What did you think? Sound off in the comments! Will Bill die? Or will he and Sookie live happily ever after?