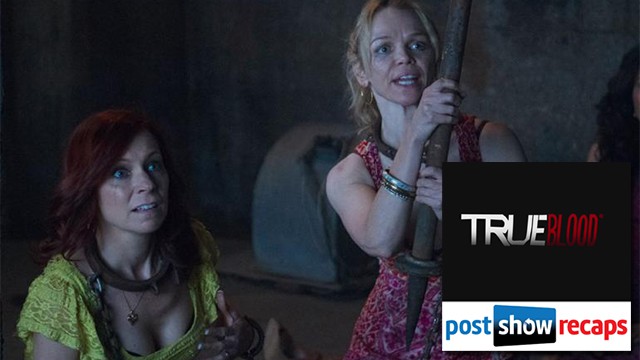 Sundays can feel like a chore. More directly, watching True Blood inspires far less excitement from me now than it used to. But this week, I found myself actually happy it was Sunday.

Last week’s True Blood killed off a major character (albeit a predictable one in Alcide) and tonight’s fallout should put all of the characters on a collision course.

This is also the first season in recent memory without an overarching villain to speak of. With the only established threat neutralized so early on, the show has a lot of time left to wrap up very few loose ends. My hope was that we would see some momentum in a few of the boring storylines like Willa, Lafayette, etc.

Pam tells Eric how much she hates Shreveport, which is True Blood lingo for a cue to a flashback. And this gives us a glorious opportunity to see the Magister (personal favorite Zeljko Ivanek) make a cameo. In this flashback to 1986, the Magister is ready to sentence Eric for his decades of disobedience by forcing him to… run a small business in Louisiana. It’s apparently prudent to discipline through tediousness and monotony. Just wait until Eric learns that eight of ten businesses fail: that’ll show him! So delightfully evil, that Magister. Eric is even less impressed when he learns he’ll be running a video store (which has Twizzlers, but no Red Vines… tough life). The Magister details that the basement, which is dedicated to selling XXX videos, has a secret door from the Civil War or something. I’ll bet $100 that this comes up again later as part of the plan to save Arlene and Nicole. Because obviously.

This scene is cute, but it really only services to retcon how Eric became a Sheriff in Shreveport. Seeing Fangtasia before it actually became Fangtasia was definitely a great concept though.

In 1996, we get our first look at Ginger, who hilariously started out as a fascinated fan of vampire lore. This show always needs more Ginger, so I’m glad to see we get the origin of how she developed her obsession with Eric. Even more surprising is that Fangtasia was all Ginger’s idea, from the name to Eric’s throne to the bar design. Color me shocked. Of course, Pam can’t let Ginger take the credit – so she glamours her and passes it off as her own.

I Just Called to Say… Your Loved One Died, Please Pick Up the Body – Sookie and Jason are each forced to make some death calls this week. Sookie tells Jackson, Alcide’s father, who details for Sookie that his son “loved the fuck” out of her. Werewolves really have a way with words. I also get the sense that Sookie isn’t calling to let him know, so much as she’s hoping he’ll jump in and take care of the associated costs/expenses. Now she’s free to move on.

Meanwhile, Jason calls Hoyt to inform him of his mother’s death. And just like that, both are en route back to Bon Temps. I’m not sure what Jackson really adds to the storyline, but having Hoyt back adds an extra wrinkle for Jessica and Jason.

Later, in order to try to figure out where Arlene is, Sookie reads Holly’s thoughts. Holly is having traumatic memories from her time locked up in Fangtasia’s basement. Everyone is thrilled for the breakthrough, but I’m confused about this: wasn’t Sookie on her way to Fangtasia last week? Did she really have to make Holly relive such a terrible experience to confirm what she already knew? Too bad: if Sookie could read my mind, she’d know I’m mentally giving her the finger.

And then, those magic words from Sookie. “I’d better go tell Bill.” Leave it to Sookie to have her boyfriend dead for like four hours before already moving on. Sookie being with Bill was literally the last thing Alcide would want… but hey, he’s dead and Sookie never loved him anyway. So glad we had him on the show for five years.

Yawn in 60 Seconds – Jessica and James are together in bed. Jess is giving us the closest thing to a vampire anorexia storyline by refusing to feed. James calls in Bill, her maker, to get to the bottom of why she won’t eat. And obviously, it’s because she feels bad for losing it and eating, like, all of Andy’s fairy babies. Let’s be honest: the one that survived (Adilyn) is annoying enough – the thought of having three more running around makes me cringe. So Jess really provided a public service!

Sookie volunteers to let Jessica feed off of her, but not before delivering some kind of weird rousing speech about how she doesn’t care about her. I like this honesty from Sookie. She’s always been a pretty selfish character wrapped up in her own world of self-importance, so to see her admit it to Jessica was kind of validating.

As a matter of plot convenience, Jessica refuses to drink Sookie’s fairy-ish blood and so James’ human partner, Lafayette, is called in to provide Jess with the nourishment she needs. Jess is still skeptical, going as far as to question whether drinking human blood is morally okay for vampires because it harms people. After sharing his own painful memories with her, Lafayette is able to convince her that she needs to eat. While she feeds on Lafayette’s arm, she makes a cutesy face at James, further indication that their showmance is ON.

Funny that Jess still has no idea she is being displaced in her own relationship. She might need a vampire with better counting skills to help her understand that a relationship has two people, not three. I’m sure The Count from Sesame Street is available.

Overall, though, the update is that this storyline is still boring. Major snooze.

The Avengers – After leaving Holly’s, Jason and Sam are off to inform a townsperson, Rosie, that the Hep V-ampire gang killed her husband Kevin. Sam tries to go rogue on Jason and wants to go to Fangtasia to save his baby mama, Nicole (who I honestly forgot was on the show for a while). Suffice it to say, Jason isn’t having it. Sam lets out a frustrated groan (or is that constipation?), but he eventually agrees to re-think their plan and make a more concerted effort.

Sam gives in surprisingly easily for someone who has their unborn child just waiting to become vamp food. I think I’ve put up more fight to get out of household chores or call shotgun on a roadtrip. But c’est la vie: Nicole sucks anyway.

Rosie is a mess – not that I care, given that we have known the character for all of five minutes – and the boys promise her they’ll kill the vampires that murdered her husband. To recap, her husband was killed by the Adam Levine vampire two weeks ago. Said vampire is now dead. So… consider yourself avenged, Kevin.

Back in Town – Bill and Sookie are prepping to raid Fangtasia… but not before Bill gets a taste of Sookie to, um, preserve his strength and stuff. They’re going with that, I guess.

And right on time, Pam and Eric show up at Bill’s house. “Pam tells me you wrote a book in which you claimed not to be an asshole anymore,” Eric deadpans. His momentary reunion with Sookie is weird – on the one hand, she looks distraught that he has Hep-V; on the other hand, she looks kinda into it. Sookie needs a hobby other than crushing on vampires. I hear Candy Crush is addicting.

Pam wants to move on with their pre-planned itinerary, but Eric’s got some unfinished business with Sookie. She fills him in that she’s single, shoehorning in that the cause of her last break-up was death. And let’s not forget that he has literally been dead for one day. Alcide has been dead for the equivalent of one season of 24 and Sookie is basically over it.

Then A Hero Comes Along (and Sookie Too) – Eric decides to take control of the rescue mission by – wait for it – telling everyone there’s another way into Fangtasia. For serious, True Blood?! You owe me $100! You couldn’t have waited a few episodes at least to bring the secret door we’ve never heard of up again. Faster than you can say deus ex machina, Sam has shifted into a rat and come to save everyone by letting them know that some vampires are coming to their rescue. Huzzah!

Sam inexplicably leaves (…?) just in time for one of the vampires to come downstairs to collect a snack. And to make things dramatic, it’s Arlene, the only endangered character we care about.

Improvising, Eric fakes seeking refuge with the other H-vamps, bringing Sookie along as bait. They distract the bad guys so that the rest of the group can sneak in the back and save everyone from the dungeon. I seriously can’t believe I just wrote that last sentence. Am I recapping a show on HBO or an episode of Power Rangers?

We Are Never, Ever Getting Back Together (I think?) – More bad timing. The mob of disgruntled townspeople arrives, opening fire on the vampires inside and putting fire in the way of Sookie/Eric being reunited with their friends.

It’s H-vampires vs. good vampires vs. angry mob. Most of the H-vamps, including the creepy British one with a crush on Sookie, are killed in the battle. I think Bill even gets to stab Cannon Fodder Bad Guy in the head. Told ya.

Sookie uses the chaos to go over to Arlene, who has been virtually drained of all of her blood. Proving that he’s not an asshole anymore (of course, his insistence that he isn’t an asshole anymore is the exact kind of thing an asshole would say), Bill saves Eric’s life and then provides Arlene with his blood at Sookie’s behest.

It isn’t enough: Arlene sees Terry calling for her and tries to convince Sookie to let her go. With some more blood (and a pep talk), Arlene is convinced to let Terry go and to be strong enough to raise her kids.

In the aftermath of the battle, everyone is alive and well. There are no casualties among our main characters. And Sookie and Eric share a long meaningful look, possibly their last of the series. Their storylines crossing paths for this episode was great, but the writers are committed to roping Eric back into the Sarah Newlin plot.

I’ll diverge from recapping here for a moment and talk about my take on the Eric/Sookie pairing. I believe it was the most effortless pairing by far. Giving Eric Hep-V and obviously just barrel rolling towards his death seems like a cheap out to put Sookie back with Bill for good with no distractions. But I’ll always think making Sookie/Bill endgame was a huge mistake for the writers. Bill may have made amends from his days as Billith, but his past actions are enough to make me feel like he is the one that should die before the series ends, not Eric.

Back on track. Even more than last week, I’m curious about where we go from here. Everyone is safe, all the characters are reunited and there’s no obvious story direction anymore. But if every episode is as tense and filled with Easter eggs as this one was, I’ll be ecstatic. For the first time in several years, I’m looking forward to each episode.

Are you as happy with this episode as I am? Who do you think Sookie should be with? Acceptable answers include: Bill, Eric, Alcide, or Terry in Heaven.