LIVE at 10:15 pm ET / 7:15 pm PT, Rob Cesternino and Josh Wigler recap the season 5 premiere of AMC’s The Walking Dead, “No Sanctuary”. Join us for our live review immediately after the episode.

Rick and company are able to escape from Terminus with the help of Carol but are left with the question of whether they are the Butcher or the Cattle in The Walking Dead Season 5 premiere, “No Sanctuary”.

Josh was surprised to see how big this premiere was after seeing the way Season 4 had ended with almost everybody getting stuck in the train car. Fortunately, the train car is done. Terminus is done and they’re back on the road again.

For the start of this season, so far, they are really just hitting the ground running right away which is a good way to start. It felt like an action movie and a very big night for Carol. Turning up the momentum, they have turned Carol into a serious action hero in this episode. Great way to start the character off this season.

Rick starts this series off as a pretty normal, noble police officer with moral codes and ethics. And the last episode seen of him before this one was biting some guy’s throat out. So that flashback was meant to setup this is something we need to keep an eye on. Rick reuniting with Judith in this episode might make him worse. Josh believes Gareth could be a series regular now.

Abraham has one agenda, with one track mind. He just wants to get on the mission of getting Eugene to Washington, D.C. and anything else that’s a distraction is something he’s not into. Although he likes killing zombies, he’s not into killing things that are unnecessary.

Josh feels bad for Eugene all the time because of the hair. Now he’s wondering whose hair is worse, Eugene’s on The Walking Dead or Corey Stoll’s hair on The Strain. On a different note, Josh thinks Eugene is the worst person on the crew unless he can back up what he’s claiming about having the cure for the zombie apocalypse. But it’s a long way to Washington, D.C.

There’s a lot of insanity going on between the walkers versus Rick and his group. Rob wonders if this is going to be a theme in this season: Are there any good people left? Can you still be a good person in this universe? The guy in the hat they call “Cabin Douche” says it’s not possible. Rob thinks he misplayed the whole thing with Judith once he got the strategic advantage. Josh approves of Cabin Douche wanting to kill Tyreese in this moment. When Cabin Douche gets his hands around Judith, he has Tyreese disarmed and has put the knife and gun on the ground and slide them over. Now Josh doesn’t understand why Cabin Douche doesn’t take the gun and point it at Tyreese and shoot him and why would he make Tyreese go out into the swarm of zombies outside? Not a great call. Tyreese tells Carol that he killed Cabin Douche but as he’s beating the crap out of him, he says “I won’t.” So did he finish the job? Regardless, this actually makes a good story line for Tyreese.

It was a good scene with Tasha and Carol and it was brutal of Carol to just let the zombies come and clean her up and not give her a courtesy of a bullet to the head. These Terminus people, termites as they’re called are pretty awful people so maybe Tasha got what she deserved.

The “ritual room” that Tasha Yar and Carol were in leads us to wondering if these guys are creating their own religion. Does it center around cannibalism? What is the deal with that? These guys don’t seem to be soft-hearted people to be into that as they seem to be more business-minded. So Josh doesn’t see how religion factors in to it but it seems to be the case.

Additionally, Josh believes that we’re not entirely done with Terminus here even if it has fallen or most of the people there are dead or not in power. That said, there’s still so much more to learn about the society. Rob says that a bridge too far for him is the part when they had to start eating people. Josh concurs. Food is in short supply so you got to eat where you can. Rob says #foodisdelicious.

That big opening scene where people get their throat slit open that was very chilly and unsettling. The worst part was just how casually it was happening. It’s institutional evil and just another day in the office for these guys. Very messed up, very screwed up and Josh is just blown away by it.

The heroes are lucky they’re at the end of the line. Rob believes that when you die, and then someone eats you, then you live on through them. And this is the truth taken from the Gospel of Cesternino.

Josh talks about the missed opportunity of the very first scene in the present day when everybody is in the train car and they’re making weapons out of their belts and pieces of the train. Then Rick tells them to stab the zombies in the eyes first and then stab them in the throat. Josh actually wants to see that play out.

At the end of the credits, there was a little extra scene at the end of the episode where Morgan appeared and he is back! Morgan is one of the best characters on the show and him getting back in the mix is very exciting.

Rob and Josh take questions from the audience.

And now for the Season 5 Part One Death Pool… Josh is going with Bob, Rosita, and Gareth. Rob is going with Eugene, Sasha, and Morgan.

To cap it off, this is a great start for Season 5. It can be a hit or miss sometimes but this is the perfect episode of The Walking Dead. This is exactly what Josh asked for when he tuned into this show so he’s happy to get it right out at the gate. 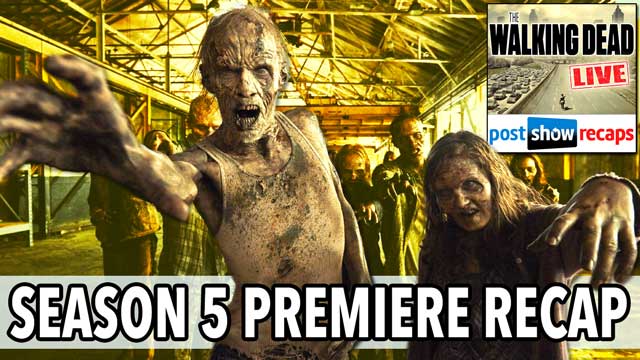