Rob Cesternino (@RobCesternino) and Josh Wigler (@RoundHoward) recap the Walking Dead Season 4, Episode 11: Claimed. Join the discussion to talk about everything that happened in tonight’s episode.

On this episode Rob and Josh try to discover the following questions and much more:

We hope you enjoy the show almost as much as everybody seems to enjoy Rick’s bed. 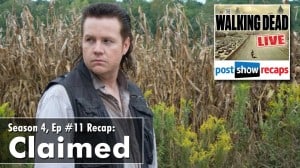