Rob Cesternino and Josh Wigler recap The Walking Dead Season 4, Episode 12: Still. Join us LIVE to ask us your questions after the episode.  In tonight’s podcast recap, Rob and Josh discuss the following:

Ask your questions on Twitter with the Hashtag: PSrecaps 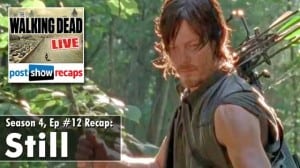