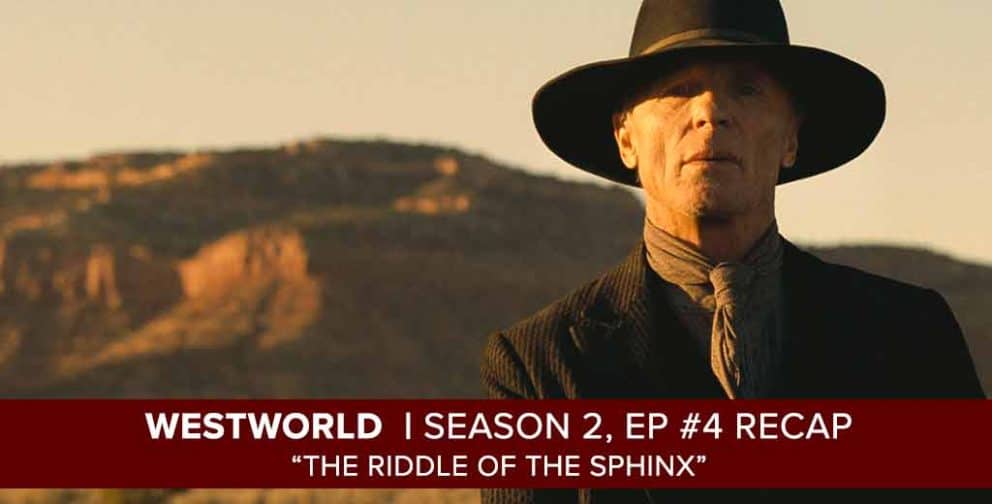 Westworld | Season 2 Episode 4 Recap: “The Riddle of the Sphinx”

Josh Wigler (@roundhoward) recaps the latest episode of Westworld, “Riddle of the Sphinx,” and his recap comes with an asterisk.

You know what they say: if you aim to cheat the devil, you owe him an offering — and in the case of the latest Welcome to Westworld podcast, the offering is co-host Jo Garfein (@jopinionated), who sadly could not appear this week due to being sick. Get well soon, Jo, and we’ll see you at Shogun World!

While our regular co-host is on the mend, Josh is joined this week by Emily Fox (@emelette), and how appropriate! In “Riddle of the Sphinx,” it’s revealed that Emily, the Man in Black’s daughter, is the same guest who escaped from The Raj in episode three. The Man in Black and Emily have reunited, just as Josh’s very bad Ed Harris impression and Emily have joined forces on the podcast.

In their conversation about “Riddle of the Sphinx,” Josh and Emily weigh in on what some fans have described as the best episode of Westworld yet, the various sequences involving Peter Mullan as James Delos, the possibilities and implications of the human-host hybrid experiments, the Man in Black’s apparent redemption arc, the return of Elsie Stubbs (!!), the secrets of Ghost Nation, and much more.

Let us know what you think of this week’s podcast in the comments below and send us your questions through our feedback form. Josh and Jo will be back next week to discuss episode five of season two, “Akane No Mai,” where all things Shogun World shall be revealed.