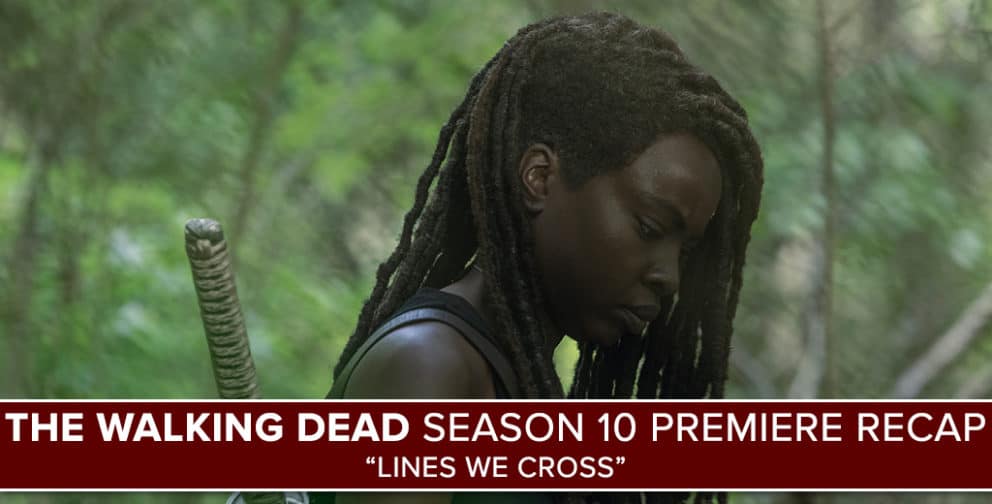 Like a satellite smashing into the earth, Josh Wigler (@roundhoward) and Jessica Liese (@HaymakerHattie) crash into the tenth season premiere of The Walking Dead, “Lines We Cross.”

Directed by Greg Nicotero and written by Angela Kang, “Lines We Cross” begins several months after The Walking Dead season nine finale. Despite the time and distance, the catastrophic deaths at the end of season nine remain fresh on the mind for those who survived: Michonne (Danai Gurira), Daryl Dixon (Norman Reedus), Carol Peletier (Melissa McBride) and so many more.

Divided into different chapters, “Lines We Cross” focuses on several different sets of characters as they train for an inevitable rematch with the Whisperers — a rematch that gets closer to reality once the group discovers a zombie skin washed upon the shore of Oceanside. The conflict only escalates when a satellite crashes down from space (seriously!) and causes a massive forest fire, forcing our group into action to stop the blaze from spreading. Of course, the operation requires a trip into Whisperer territory — and based on the look between Carol and Alpha (Samantha Morton) at the end of the episode, it does not appear to be a trespass Alpha will take lightly.

Josh and Jess dig into all of those storylines and more, engage in listener feedback, and dive into the comic book zone as well. Send your questions and comments in by sending in an e-mail, contacting us on Twitter, or using our feedback form.