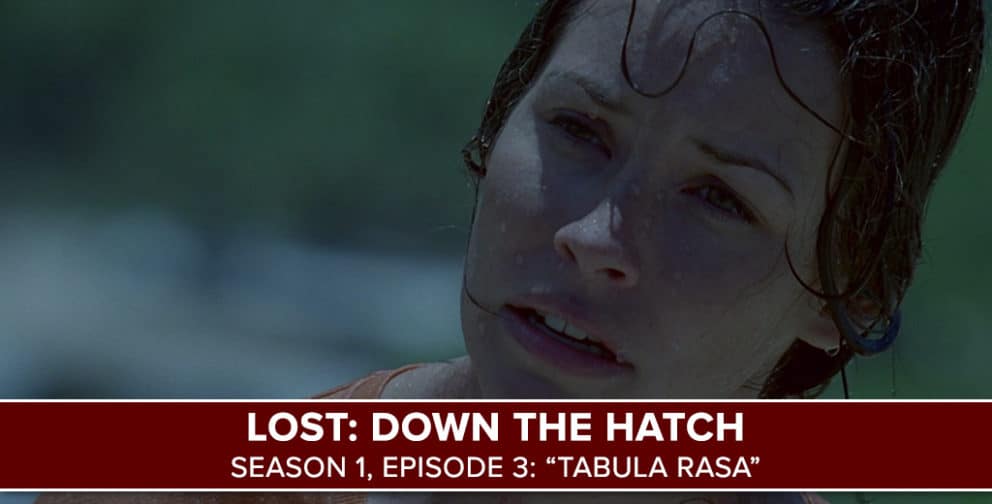 LOST: Down the Hatch hosts Josh Wigler (@roundhoward) and Mike Bloom (@AMikeBloomType) wipe their slates clean as they discuss the third hour of the series, “Tabula Rasa.”
In their conversation, Josh and Mike assess the curious case of Kate Austen (Evangeline Lilly), the character at the heart of the series’ first ever full-tilt flashback installment. Heading out of “Pilot,” Kate enters the second Down the Hatch recap as the leading contender in the MVP category. Will that lead hold following her first flashback episode, or will someone come and steal her thunder? And how will Josh and Mike fare with the 108 minute time limit now that they are finally eligible for an electromagnetic crisis? Listen to the podcast for the answer — or check your time stamp for the spoiler.

A refresher on the plot of “Tabula Rasa” …

After intercepting the mysterious French Woman’s transmission, Kate Austen (Evangeline Lilly) and others on the jungle journey decide they must lie to the other survivors about what they have just learned: they are not alone on this island. But Kate has more immediate concerns, and an even bigger personal lie to maintain: her status as a fugitive, a secret she keeps from everyone. Of course, it’s not a secret to Jack Shephard (Matthew Fox), nor is it a secret to the ill-fated marshal Edward Mars (Fredric Lehne).
In a flashback, we learn about Kate’s life in the months prior to landing on the island — and because Josh and Mike are ridiculous, the one-armed man Ray Mullen earns a brand new nickname.
“Tabula Rasa” was directed by Jack Bender and written by Damon Lindelof. It first aired on 10/6/2004.

• 4 Stories – Each podcast begins with a discussion of four main stories from the episode, both in front of and behind the camera;
• 8 Sounds – The events of LOST pop right off the camera and straight into your ears with eight memorable moments replayed on the podcast;
• 15/16 Others – Josh and Mike answer questions and comments sent their way through the official e-mail address: [email protected]postshowrecaps.com
• 23 Points – Each week, Josh and Mike hand out points for the best and worst characters of the episode in question, in a foolhardy attempt to determine the most and least valuable players in the LOST pantheon.
Each episode of Down the Hatch clocks in at no less than 42 minutes. If it clocks in at longer than 108 minutes, Josh and Mike have triggered a crisis! Consequences will ensue.