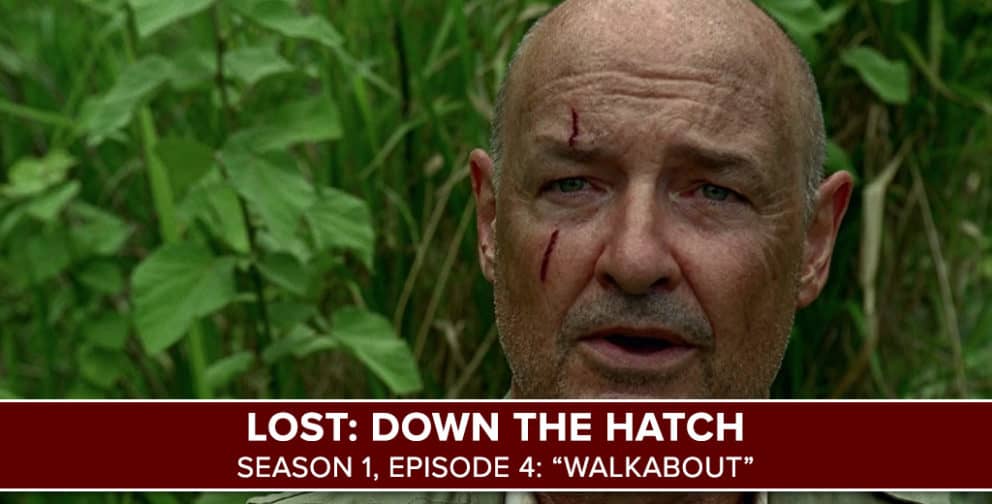 Down the Hatch hosts Josh Wigler (@roundhoward) and Mike Bloom (@AMikeBloomType) embark on “Walkabout,” the iconic LOST episode centering on Terry O’Quinn as John Locke.
In their conversation, Josh and Mike break down Locke’s coming out party, as the knife-wielding box man breaks free from his shell and hits the ground running in more ways than one. There are many who cite “Walkabout” as one of the very finest episodes of LOST, if not the number one contender on the board. Where do Josh and Mike land on the issue? They do a deep dive into what makes both the episode and Locke as a man so special, introduce a new segment to the podcast, and once again inevitably spin the Frozen Donkey Wheel as they far exceed the 108 minute time limit — with zero regrets, one might add. Don’t ever tell us how long we can podcast about LOST, ever!

A refresher on the plot of “Walkabout” …

Boars! It’s a full-on invasion of pigs at the crash site of Oceanic 815, requiring the survivors to burn the bodies of the dead in order to keep the island’s local predators away. The pigs arrive at an opportune time, just as the survivors start running out of food. Enter: John Locke (Terry O’Quinn) and his briefcase loaded with knives, as he posits a plan to trap the piglets and kill them for sustenance. Locke’s trek through the jungle goes awry when he and the others cross paths with the dreaded Monster — but miraculously, Locke lives to tell the tale, returning to the beach just in time for dinner and a memorial service.
In a flashback, we learn even more about the miracles surrounding John Locke — specifically, the fact that he was once paralyzed, and is now able to walk again thanks to the mythical healing properties of the island. How this is possible, or what it means for Locke’s future, is as unknown as the monster that lurks in the jungle — but of course, those who have watched the series in its entirety know all too well that Locke’s fate and the monster’s identity are tied in darker ways than one could have ever imagined.
“Walkabout” was directed by Jack Bender and written by David Fury. It first aired on 10/13/2004.

Each episode of Down the Hatch clocks in at no less than 42 minutes. If it clocks in at longer than 108 minutes, Josh and Mike have triggered a crisis! Consequences may (and almost certainly will) ensue.

The LOST Will and Testament (Javier Grillo-Marxuach)

The Hatch: A LOST Podcast (Rosie Murphy and Sammy Roth)