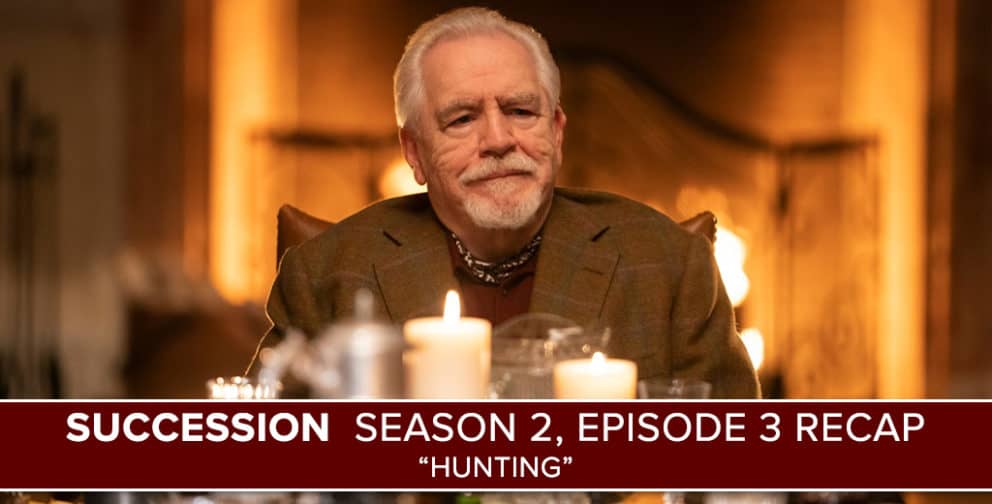 Josh Wigler (@roundhoward) and Emily Fox (@emelette) go on the record with their thoughts about Succession season two, episode three: “Hunting.”
In “Hunting,” Logan Roy (Brian Cox) announces his plans to combat his rivals: buy up PGM, a massive media conglomerate that stands diametrically opposed to the Waystar Royco worldview. Logan’s inner circle protests the strategy, but ever so quietly, delegating the responsibility to stand up and speak out against the plot like a game of hot potato. In no time at all, a different game emerges: “Boar on the Floor,” an improvised witch hunt in which Logan attempts to ferret out the traitors in his midst — separating the wheat from the chaff, or the snakes from the morons, as it were. In the process, Kendall Roy (Jeremy Strong) outs brother Roman (Rory Culkin) for trying to broker the PGM deal behind Logan’s back, thereby inadvertently putting a huge thorn in the deal’s side.
Back in New York, Shiv (Sarah Snook) is charged with speaking to elder half-brother Connor (Alan Ruck) about his desire to run for President of the United States — an embarrassing notion all on its own, but potentially a detrimental one to the Waystar Royco universe. All the while, she’s attempting to remote-control husband Tom (Matthew Macfadyen) into thwarting the PGM buy-out, referring to him as her “meat puppet.” Tom is not only displeased at the notion, but outright bad at the operation, leading to his placement as one of the many boars on the floor — right alongside Cousin Greg (Nicholas Braun), already in the thick of a panic attack due to his role in speaking with someone writing a tell-all biography about Logan Roy.
Josh and Emily weigh in on all of that and more, and dig into your feedback as well. Make sure to send feedback every week to @PostShowRecaps.