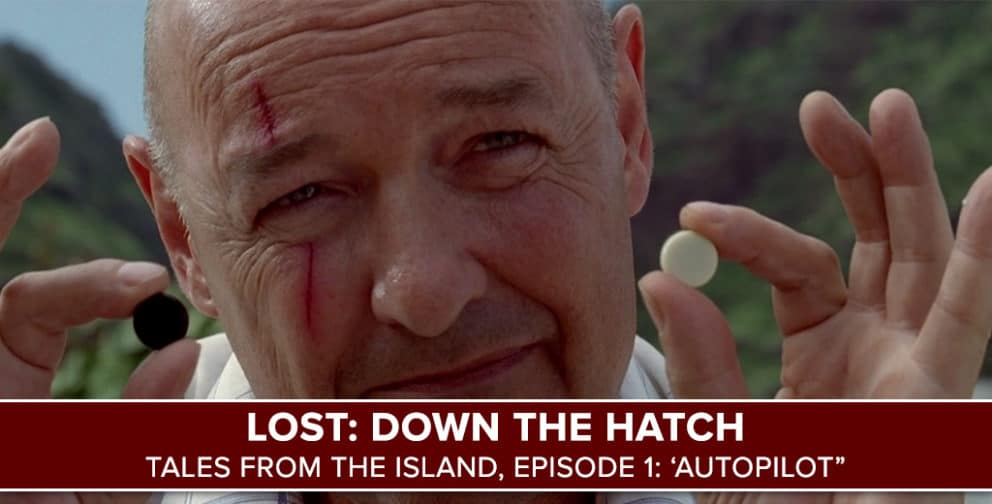 LOST: Down the Hatch | Tales from the Island, Episode 1: “Autopilot”

Josh Wigler (@roundhoward) and Mike Bloom (@AMikeBloomType) crash land into the roles of two Oceanic 815 survivors in the first episode of LOST Down the Hatch Presents: Tales From The Island, “Autopilot.”
Over the course of Down the Hatch, Josh and Mike will periodically transform the podcast into a full-on tabletop roleplaying game, ala Dungeons and Dragons. The mystical and mysterious R Filly (@Wharfrat1625) joins them in the role of dungeon master, presiding over Josh and Mike’s myriad misadventures and playing the roles of various non-playable characters in this full-on fan-fiction flurry of events from LOST.
In “Autopilot,” we open on an eye, because of course we open on an eye — but it’s not just any eye. The eye belongs to Billy Wallace (Wigler), a one-eyed man with an axe to grind against anyone and everyone who doesn’t recognize his greatness. Among those people: Rodney “Roundhouse” Cesteau (Bloom), the hot-not-cute model type who comes to the supernatural beach with a surprising amount (and source) of island experience.
Despite the shared trauma and miracle of surviving the Oceanic 815 crash together, Billy and Rodney don’t exactly see eye to eye right away, on a few levels. But further experiences will bond their journeys together, as they come to learn they have more in common than they realize — not the least of which is their relative isolation from the greater group of survivors.
The events of “Autopilot” chronicle the first four hours of LOST, from the initial crash in the two-part “Pilot” through the memorial service of “Walkabout.” Along the way, Billy and Rodney will meet a woman dressed in stripes, an old police officer from upstate New York, a mysterious stranger in the “Forest,” a food-hoarding survivor, a surprising creature from the jungle, and more.
All of these characters collide in a fully ridiculous installment of Post Show Recaps Theater, which — it bears repeating — is outright fan fiction, and probably not for everyone. If it’s not your cup of tea, move right along to the next recap episode! If you’re a fan, however, Josh, Mike and Rich will resume Tales from the Island at an unknown point in the future. As always, send feedback to [email protected]com.

Each episode of Down the Hatch clocks in at no less than 42 minutes. If it clocks in at longer than 108 minutes, Josh and Mike have triggered a crisis! Consequences may (and almost certainly will) ensue.

The LOST Will and Testament (Javier Grillo-Marxuach)

The Hatch: A LOST Podcast (Rosie Murphy and Sammy Roth)