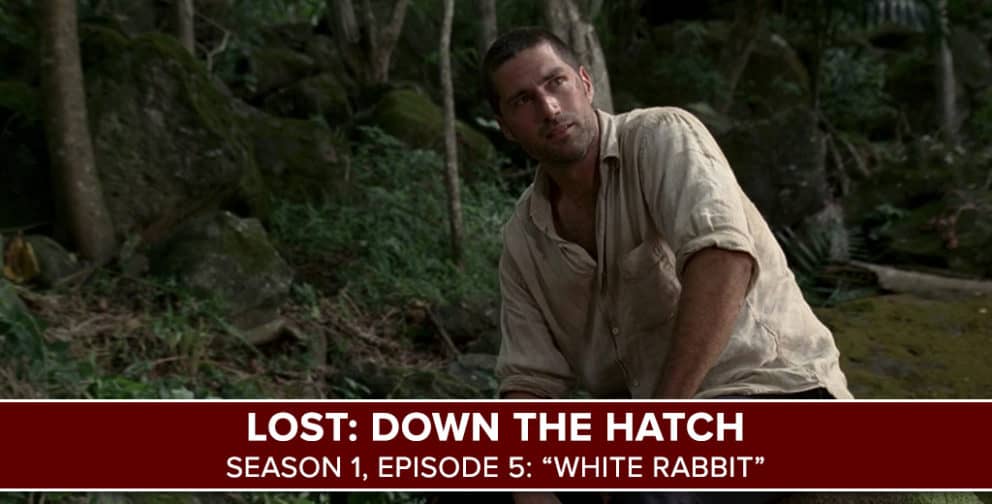 Josh Wigler (@roundhoward) and Mike Bloom (@AMikeBloomType) sprint off after ghosts in the jungle in their quest to make sense of “White Rabbit,” the fifth hour of ABC’s LOST.
In the latest Down the Hatch, Josh and Mike follow the good doctor Jack Shephard (Matthew Fox), who stands front and center in his very first flashback episode. After shaking up the format of the podcast a little bit (see if you notice!) but not enough to impact the time limit (cue the wheel spin!), Josh and Mike dig deep into Jack’s emotional experience reconciling with the death of his father and the weight of their tense relationship, how those themes impact not only that character and the series at large but the podcasters themselves, and much more.

A refresher on the plot of “White Rabbit” …

In “White Rabbit,” Jack embarks on a race through the forest after laying eyes upon his father, Christian Shephard (John Terry). Only one problem with that: Christian died in Sydney, days before Oceanic 815 took flight. Jack’s bewildered trek through the island sees him recalling his turbulent past with his father, hanging off a cliff and hanging onto his sanity. On both of those latter counts, Jack finds help in the form of John Locke (Terry O’Quinn), the men of faith and science engaging in a conversation that is quietly one of the best scenes in all of LOST.

Back at the beach camp, water becomes a critical issue as a woman drowns in the ocean and the rest of the survivors’ drinking supply dwindles down to nothing — first because of their own drinking needs, and then because “some git nicked it,” as Charlie (Dominic Monaghan) puts it. The thief in question: Boone (Ian Somerhalder), who steps in for Sawyer (Josh Holloway) as the most hated man on the beach. But before everyone can eviscerate Boone, in comes Jack with the iconic “live together die alone” speech, a phrase that echoes throughout LOST forever more from that moment onward.

“White Rabbit” was directed by Kevin Hooks and written by Christian Taylor. It first aired on October 20, 2004.

Each episode of Down the Hatch clocks in at no less than 42 minutes. If it clocks in at longer than 108 minutes, Josh and Mike have triggered a crisis! Consequences may (and almost certainly will) ensue thanks to the Frozen Donkey Wheel.