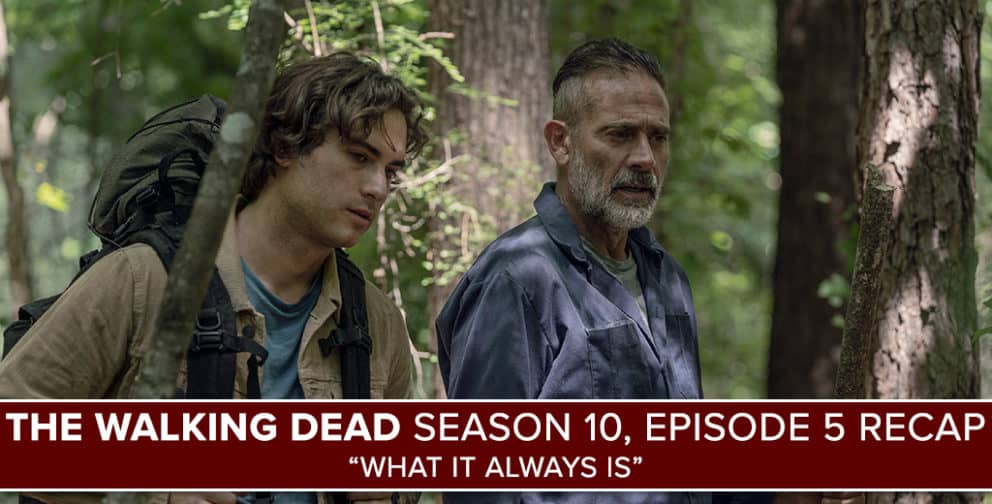 Josh Wigler (@roundhoward) and Jessica Liese (@HaymakerHattie) tap back into the Walking Dead recapping game with their podcast about season 10, episode 5, “What It Always Is.”

Fresh from escaping Alexandria, Negan (Jeffrey Dean Morgan) hits the open road with an uninvited guest: Brandon, a creepy Negan fanboy who grew up hearing stories about the Saviors. When Brandon’s dark hero worship takes a turn for the worse, Negan’s forced to confront his own past behavior, and even some literal relics from the past: his leather jacket, and his old friend Lucille.

Away from Negan, Daryl Dixon (Norman Reedus) joins Connie (Lauren Ridloff) on a mission to find her missing sister Kelly (Angel Theory), which leads to some cute moments between this not-quite-yet-a-couple. Less cute: Magna (Nadia Hilker) and Yumiko (Eleanor Matsuura), as their relationship hits a significant bump in the road. Bumpier still: King Ezekiel (Khary Payton), who reveals a deadly secret about his health.

Josh and Jess dig into all of those storylines and more, engage in listener feedback, and dive into the spoiler-filled comic book zone as well. Comic book spoilers kick in around the 58:30 minute mark.