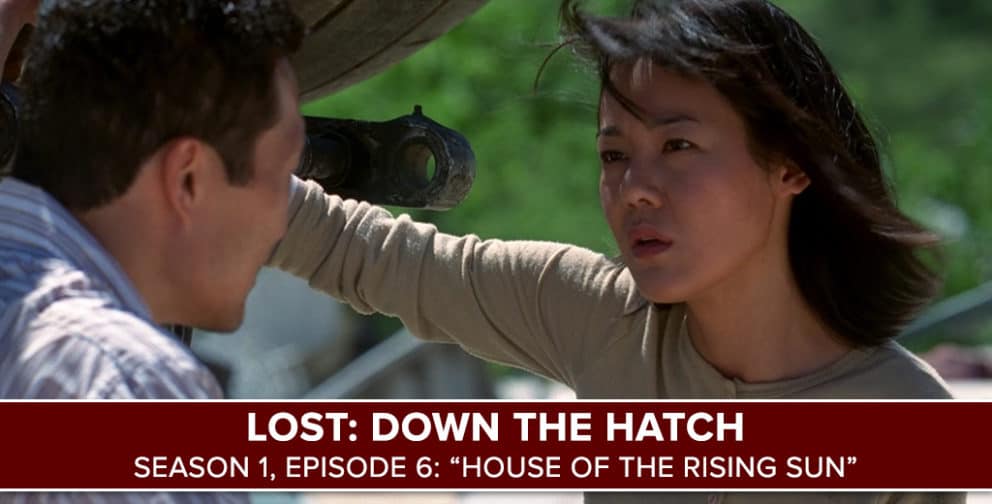 Josh Wigler (@roundhoward) and Mike Bloom (@AMikeBloomType) handcuff themselves to one another as they travel back to the very first Sun-centric outing of LOST in season one’s “House of the Rising Sun.”

In the latest Down the Hatch, Josh and Mike stop down to discuss two characters who have gone largely ignored up until this point: Sun and Jin Kwon, played by Yunjin Kim and Daniel Dae Kim, respectively. In the early going of LOST, these two characters were presented as outsiders to the rest of the Oceanic 815 survivors, with only Sun truly endearing herself to the great community in the course of the ABC drama’s first year. How did these characters leap from the sidelines into becoming major players in the greater mythology? Josh and Mike begin to drill down into these questions and these characters, and how they emerged as two of Bloom’s very favorite LOST players in the cast.

A refresher on the plot of “House of the Rising Sun” …

In “House of the Rising Sun,” Sun (Yunjin Kim) becomes drawn into the greater camp drama when her husband Jin (Daniel Dae Kim) assaults Michael (Harold Perrineau) without any apparent warning or reason. As it turns out, Jin’s attack was spurred on by his association with Sun’s father, a brutal businessman who has turned Jin into a brutal force of nature in his own right. In order to save her husband, Sun entrusts Michael with her biggest secret: she has learned how to speak English, and has not told her husband. In communicating Jin’s true intentions, Michael is able to defuse the conflict, though the tensions between Jin and Michael — as well as Jin and Sun, with still so many secrets between them both — remain simmering.

Meanwhile, further into the island, Jack (Matthew Fox) leads Kate (Evangeline Lilly), Locke (Terry O’Quinn) and Charlie (Dominic Monaghan) to the caves, which turns out to not only provide a source of fresh water, but also houses a pair of skeletons: Adam and Eve — two characters who will come to have much more specific identities (if not names) much later in the series. Jack decides the caves are a viable shelter for the greater group, causing division within the camp, and specifically between himself and Kate. Meanwhile, Locke and Charlie are drawn together by music and faith, setting the stage for the next installment, “The Moth.”

“House of the Rising Sun” was directed by Michael Zinberg and written by Javier Grillo-Marxuach. It first aired on October 27, 2004.