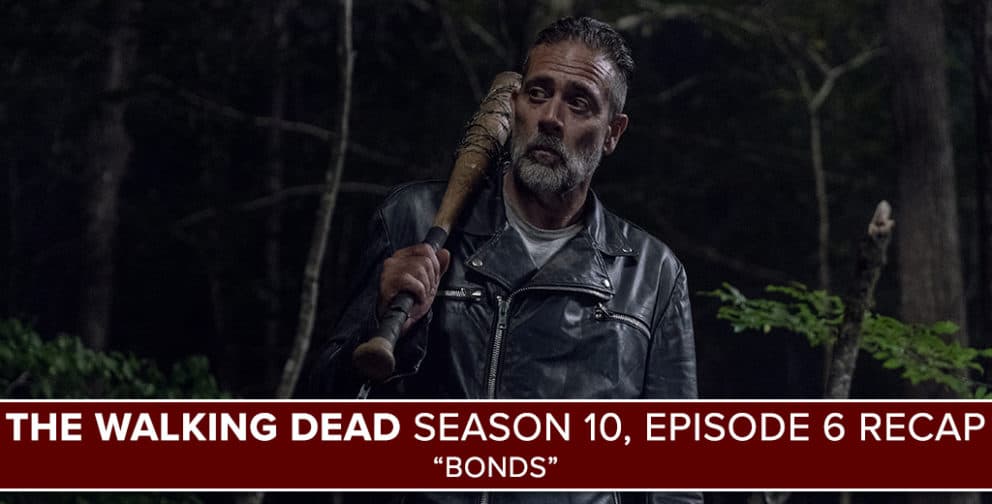 Josh Wigler (@roundhoward) and Jessica Liese (@HaymakerHattie) put their thoughts on the latest Walking Dead episode, entitled “Bonds,” in the ground for a little while, and they have emerged with hot takes!

In their podcast discussion of season ten, episode six, “Bonds,” Josh and Jess cover Negan (Jeffrey Dean Morgan) going deep into the heart of Whisperer culture, butting heads with Beta (Ryan Hurst), and his newfound fascination with the queen bee herself, Alpha (Samantha Morton). Meanwhile, Daryl Dixon (Norman Reedus) and Carol Peletier (Melissa McBride) go on an expedition of their own into Whisperer territory, returning with something — or someone — unexpected.

Elsewhere, in Alexandria, disease! Sickness! Ailments! Swine flu? Okay, probably not swine flu again, but sickness all the same! Josh and Jess examine the reasons why so many of the Alexandrians are currently shacking up at the infirmary. Plus, what’s up with Eugene (Josh McDermitt) and his new radio pen pal? It’s a hard one to talk about without getting into spoilers from the comic books… good thing we have a section dedicated for that very purpose!

Josh and Jess dig into all of those storylines and more, engage in listener feedback, and dive into the spoiler-filled comic book zone as well. Comic book spoilers kick in around the 53 minute mark.