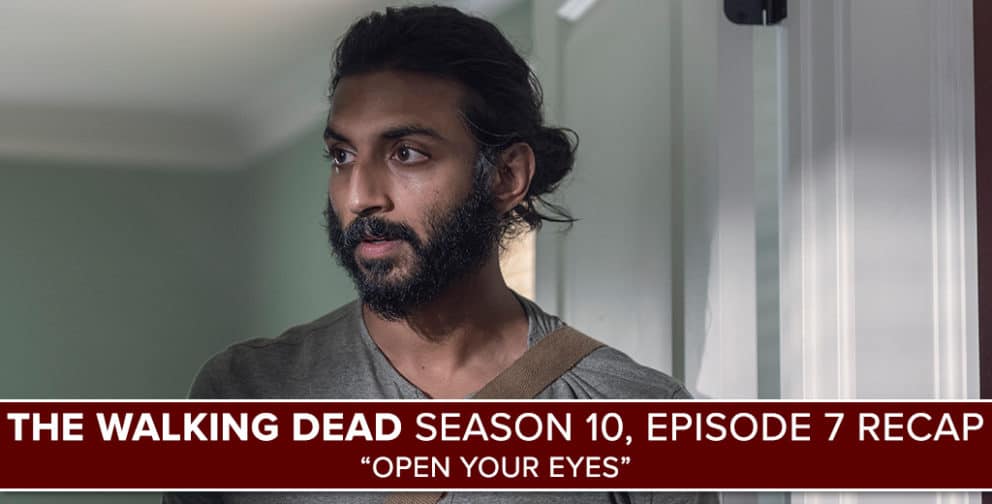 Josh Wigler (@roundhoward) and Jessica Liese (@HaymakerHattie) talk about hemlocks and headlocks, both fatal in their own rights, in the latest episode of the Walking Dead podcast, called “Open Your Eyes.”

In their discussion of season 10, episode seven, “Open Your Eyes,” Josh and Jess cover the death of a series regular, the unmasking of a Whisperer, Carol (Melissa McBride) once again serving food as an intimidation tactic, Carol once again being horrible to a child, and Arkansas Dave Mr. Rudabot. That last one is a really niche joke but man oh man did it create some belly laughs here on this podcast.

Elsewhere, in Alexandria, disease! Sickness! Ailments! Swine flu? Okay, probably not swine flu again, but sickness all the same! Josh and Jess examine the reasons why so many of the Alexandrians are currently shacking up at the infirmary. Plus, what’s up with Eugene (Josh McDermitt) and his new radio pen pal? It’s a hard one to talk about without getting into spoilers from the comic books… good thing we have a section dedicated for that very purpose!

Josh and Jess dig into all of those storylines and more, engage in listener feedback, and dive into the spoiler-filled comic book zone as well. Comic book spoilers kick in around the one hour and four minute mark.