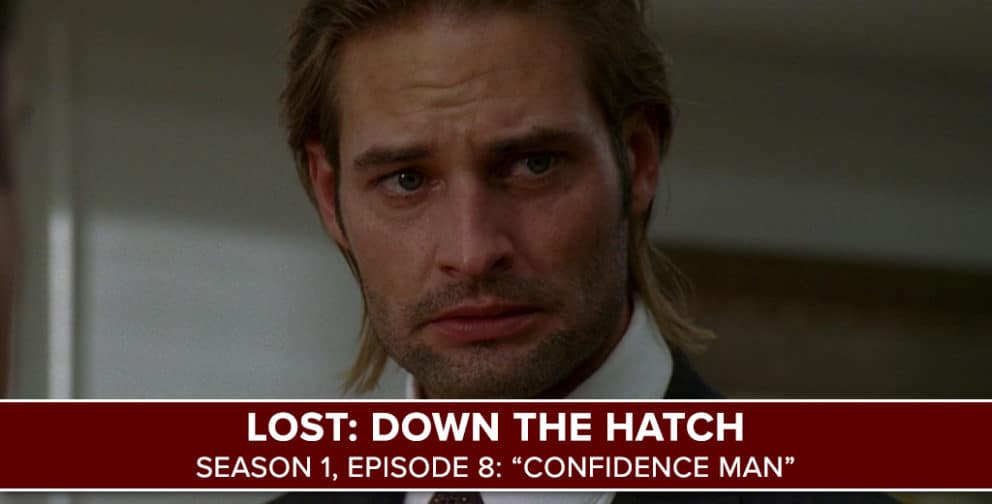 Josh Wigler (@roundhoward) and Mike Bloom (@AMikeBloomType) go Down The Hatch to read a book about bunnies. Just kidding, Josh has barely started “Watership Down.” Instead, he and Mike are here to talk about “Confidence Man,” an episode Bloom describes as his own personal “Walkabout.” Intriguing! Find out why he loves it so much in this week’s edition of the Lost rewatch.
In “Confidence Man,” we finally pull the curtain back on James “Sawyer” Ford (Josh Holloway), the grifter with a heart of gold — though you wouldn’t know it from his latest island antics, in which he allows his fellow castaways to believe he’s hoarding crucial asthma medication. As Jack (Matthew Fox), Sayid (Naveen Andrews) and Kate (Evangeline Lilly) all conspire different ways to gain Sawyer’s cooperation, the con man’s defenses slowly fray, as a flashback storyline reveals the truth about his dark past.
Elsewhere on the island, Sun (Yunjin Kim) devises a way to ease Shannon (Maggie Grace) through her asthma attacks, thanks to some help from Michael (Harold Perrineau) and some skepticism from Jin (Daniel Dae Kim). Charlie (Dominic Monaghan) convinces Claire (Emilie de Ravin) to move from the beach to the caves, with the aid of some non-existent peanut butter.
“Confidence Man” was directed by Tucker Gates and written by Damon Lindelof. It first aired on November 10, 2004.

The 23 Points Character Tracker, as of “Confidence Man” …

The 4.2 Star Episode Rankings, as of “Confidence Man” …