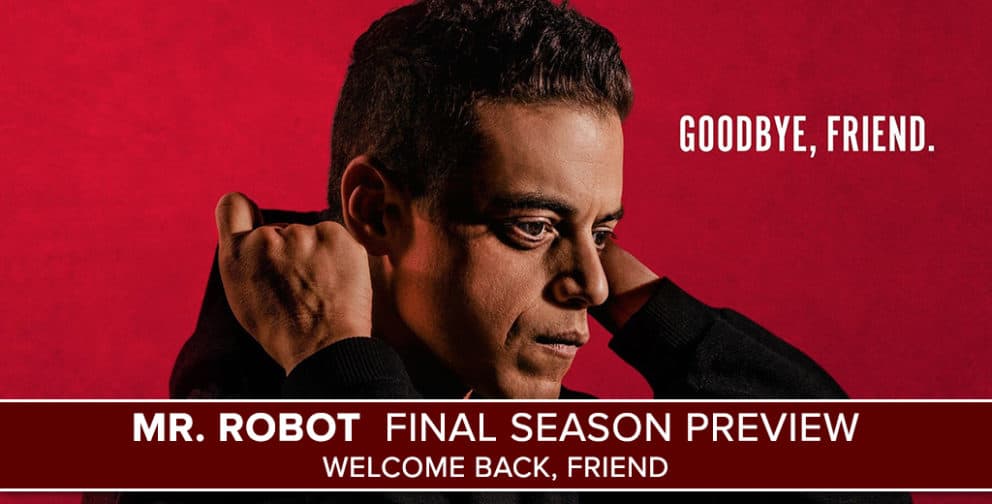 Josh Wigler (@roundhoward) and Antonio Mazzaro (@acmazzaro) return for the first time in well over a year to discuss USA Network’s Mr. Robot, which launches its final season premiere on October 6. The Sam Esmail drama looks toward the end of the line with thirteen final episodes, airing Sundays.

In their first podcast of the season, Josh and Antonio provide a reminder on where the story stands heading into the final season, pull back from their own podcast archives, and otherwise set the deck for one last run at the Dark Army.

A quick refresher on the Mr. Robot pilot …

Rami Malek headlines Mr. Robot as Elliot Alderson, a computer hacker who contains multitudes — quite literally, in the case of his alter ego: the appropriately named Mr. Robot (Christian Slater), a second personality with the likeness of Elliot’s deceased father. Through three seasons, these two sides of Elliot engaged in varying stages of war with one another, both of them disenchanted with the top one percent of the population’s stranglehold over the rest of the globe, but wildly disagreeing on means with which to bring these forces down.

In season one, Elliot learned he was the architect of “fsociety,” a computer hacker group targeting the conglomerate known as “Evil Corp.” Seasons two and three dealt with the aftermath of the infamous “Five-Nine Hack,” including the Cyber Bombings that destroyed thousands of people thanks in no small part to Elliot’s own actions. (Which Elliot? A fair question.) In the season three finale, Elliot and Mr. Robot reconcile, realizing they are both more alike than either one would care to admit; their new partnership is solidified when they reverse the actions of the Five-Nine Hack. Additionally, Elliot and the all-powerful Whiterose (BD Wong) make an unlikely alliance when the young hacker comes up with a plan to move Whiterose’s precious Washington Township project to the Congo.

What exactly does Whiterose plan to do with the massive particle collider currently lurking underneath New Jersey? Are alternate realities and time travel on the menu for the final season? Those questions — as well as the fates of Elliot, Robot, Darlene (Carly Chaikin), Angela (Portia Doubleday), Tyrell Wellick (Martin Wallström) and so many more — are all up in the air for the Christmas-themed final season.