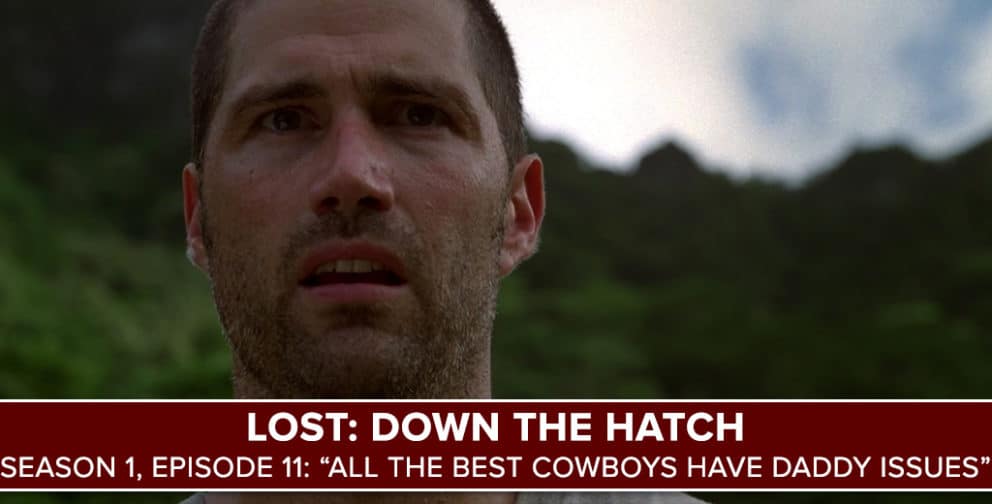 LOST: Down the Hatch | Season 1, Episode 11: “All the Best Cowboys Have Daddy Issues”

Josh Wigler (@roundhoward) and Mike Bloom (@AMikeBloomType) sprint off into the jungle in search of the dangerous man at the heart of “All the Best Cowboys Have Daddy Issues.” Good thing they’re not wearing red shirts!

In “All the Best Cowboys,” Jack Shepherd (Matthew Fox) takes it upon himself to track down Ethan Rom (William Mapother), the sinister Other who abducted Charlie (Dominic Monaghan) and Claire (Emilie de Ravin). Mission accomplished on the Charlie front, but not without some significant obstacles, including administering jungle CPR to a hanged man and weathering the most vicious beatdown of the series thus far. All the while, Jack contends with memories of his dead father Christian (John Terry), and the circumstances that led to his fatal trip to Sydney.

Elsewhere, John Locke (Terry O’Quinn) makes a new friend in Boone (Ian Somerhalder) as the two of them team together to find Charlie and Claire. They find something else instead: a mysterious hatch embedded in the earth of the island — and while it may be a while before they crack it, the door is now wide open for the rest of the climactic season.

“All the Best Cowboys” was directed by Stephen Williams and written by Javier Grillo-Marxuach. It originally aired on December 8, 2004.

The 23 Points Character Tracker, as of “All the Best Cowboys Have Daddy Issues” …

The 4.2 Star Episode Rankings, as of “All the Best Cowboys Have Daddy Issues” …