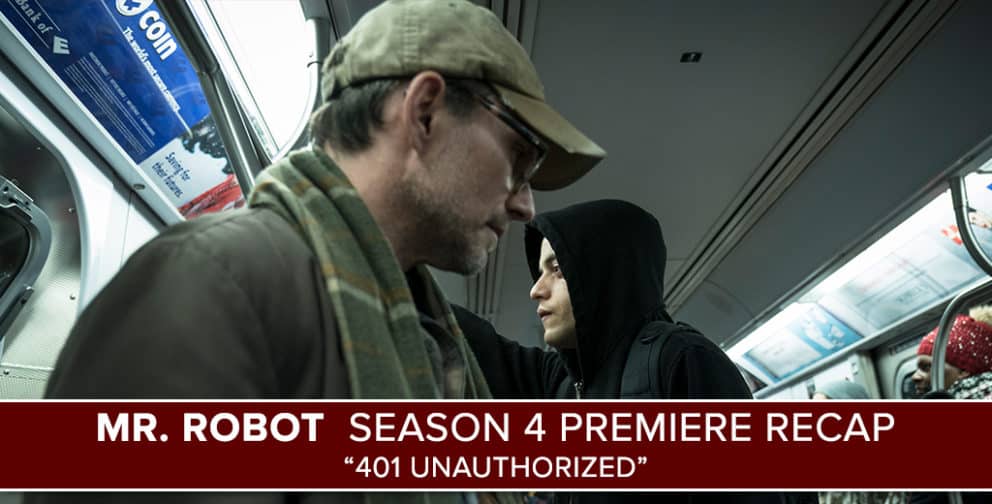 Josh Wigler (@roundhoward) and Antonio Mazzaro (@acmazzaro) waste no time at all hopping right back into the Mr. Robot podcast by recapping “401 Unauthorized” — and why should they? Creator Sam Esmail is certainly not wasting a second.

The fourth and final season premiere, entitled “401 Unauthorized,” begins with a bang, continuing a scene from season three in an entirely shocking and unexpected way. Saying anything more would be saying too much, at the risk of spoiling someone who is reading this text by accident. Safe to say, it’s big! It’s brutal! And it’s a loud announcement of the final season’s intentions for its audience, as Elliot Alderson (Rami Malek) and Mr. Robot (Christian Slater) integrate with one another for one last run at the Dark Army.

Josh and Antonio dive into Elliot’s latest plan to take on Whiterose (BD Wong), the premiere’s big moments for folks like Angela (Portia Doubleday) and Darlene (Carly Chaikin), the brand new character introduced in the Dom DiPierro (Grace Gummer) storyline, and much more. Also, Josh and Antonio announce a new podcast. A lot happening! Make sure to subscribe to this show and send in your questions and comments at postshowrecaps.com/feedback.