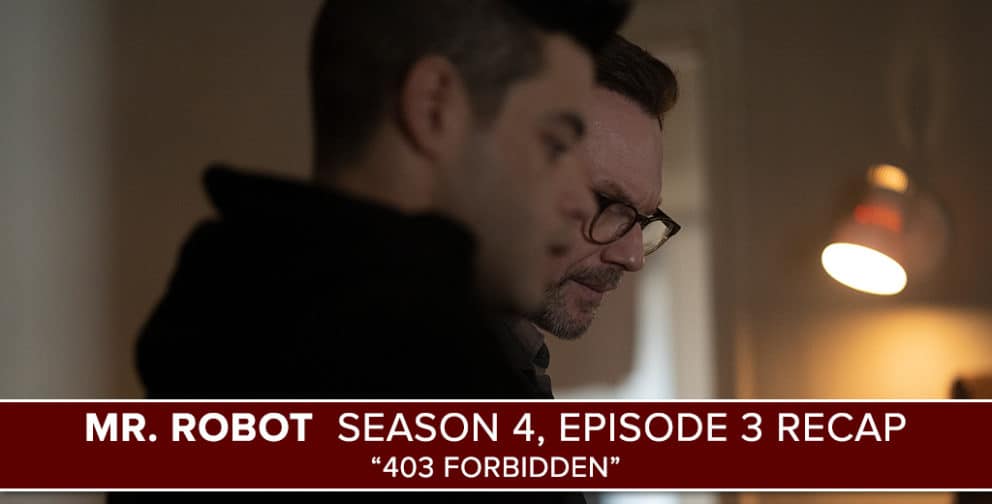 Josh Wigler (@roundhoward) and Antonio Mazzaro (@acmazzaro) are each other’s wingman as they go on a date with the latest episode of USA Network’s Mr. Robot entitled “403 Forbidden.”

While there’s no major reveal like “the other one,” the fourth and final season’s third installment nonetheless pulls the curtain back on a major player: Whiterose (BD Wong). Specifically, “403 Forbidden” flashes back in time to reveal the greatest tragedy in Zhi Zhang’s life, paving the groundwork for the Dark Army leader’s enigmatic project. Beyond Whiterose, Elliot (Rami Malek) finds some common ground with a young woman named Olivia (Dominik Garcia), while Fernando Vera (Elliot Vilar) reemerges from the shadows — and whatever he has in mind, it’s probably bad news for Krista (Gloria Reuben).

Josh and Antonio dig into all of those corners of the Robot universe and more, in addition to answering questions from the listeners. Send your theories and feedback every week to our email address or by reaching out on Twitter.