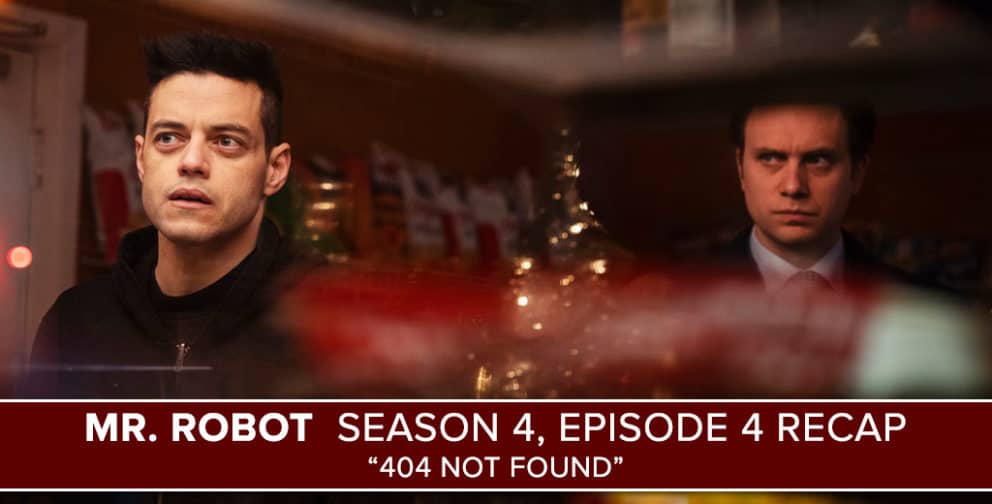 Josh Wigler (@roundhoward) and Antonio Mazzaro (@acmazzaro) were lost in an effort to escape the howls of death. Now, one day later than expected, they are here with their recap of the eventful fourth episode of Mr. Robot season four, “404 Not Found.”

In “404 Not Found,” three men spend Christmas Eve by taking a walk through the woods — okay, technically two: Elliot Alderson (Rami Malek) and his imaginary wingman Mr. Robot (Christian Slater), as well as Tyrell Wellick (Martin Wallström). Their objective: find and destroy a Dark Army operative before he can report back to Whiterose (BD Wong) on their plans to thwart the Deus Group. The complication: they are completely lost, without any cell or internet service whatsoever, in very unfamiliar surroundings. The night does not end well for everyone; elsewhere, things go much better for Darlene Alderson (Carly Chaikin) as she tries to track down Elliot, but it’s a strange night for her as well.

Josh and Antonio dig into all of those corners of the Robot universe and more, in addition to answering questions from the listeners. Send your theories and feedback every week to our email address or by reaching out on Twitter.