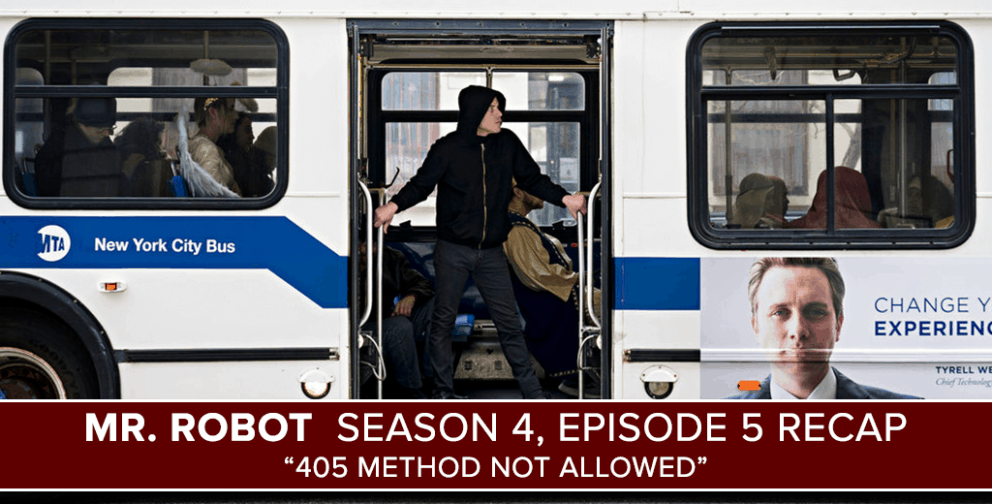 Josh Wigler (@roundhoward) and Antonio Mazzaro (@acmazzaro) script out all their thoughts on the latest episode of Mr. Robot and translate them to podcast via text to voice, as a grand tribute to the (mostly) dialogue-free “405 Method Not Allowed.”

In “405 Method Not Allowed,” creator Sam Esmail removes spoken dialogue from the equation for a largely wordless hour of the USA Network thriller. Elliot (Rami Malek) and Darlene (Carly Chaikin) break into Virtual Realty in an attempt to get their hands around the throat of the Deus Group’s money source, while Dominique DiPierro (Grace Gummer) is sent upstate to check on the burning Dark Army van left in the wake of “404 Not Found.” It’s all action, all the time, in a very special Christmas episode of Mr. Robot, and therefore a very special episode of the Mr. Robot podcast.

Josh and Antonio will be late with their podcast recap of “406 Not Acceptable,” so plenty of time for you to send in your questions and comments. Do so at by writing in to our email address or by reaching out on Twitter, and keep an eye out on your podcast feed on November 13.